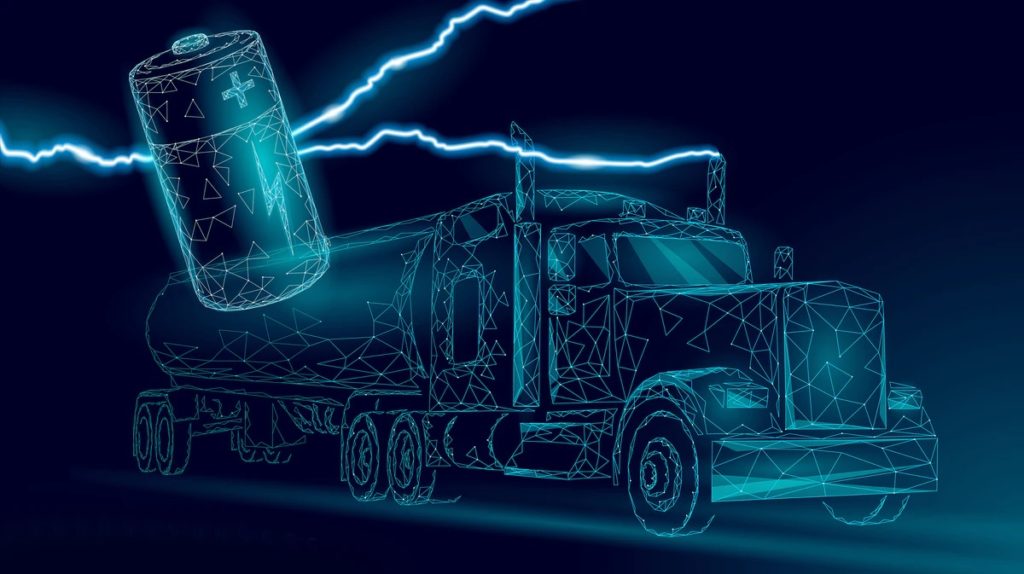 There are many options to power lower or zero-emission trucks, and they all provide intriguing benefits, a report by Gladstein, Neandross & Associates found.

For at least the next few years, the trucking industry will be wrought with weekly—possibly even daily— updates on which fleet is using what new sustainable powertrain. It’ll be exhausting just to keep up.

A few key findings include that the number of BEVs used by medium- and heavy-duty fleets, which exceeds 2,000 units, will double by 2023. Furthermore, 69% of the early adopter fleets surveyed have plans to pilot or purchase a BEV “in the near-term,” with 90% of those choosing to have their own charging infrastructure set up.

Momentum has been building for many years. According to the GNA report, common reasons for increased interest in BEVs included maintenance and fuel cost savings, and driver satisfaction.

A little less than a year ago, the first of the Freightliner eCascadia Class 8 zero-emission trucks (ZETs) were delivered to Penske Truck Leasing and NFI up the coast in the Napa Valley region. Market leader Daimler Trucks North America (DTNA) is expected to start production of the eCascadia by the end of 2021. Volvo Trucks, which showcased a full electric Class 8 eVNR earlier this year, will also produce the eVNR around the same time.

This vehicle testing and adoption will certainly help certain regional haulers in places such as California that are making plans to adjust to stricter emissions requirements, but it’s not a panacea.

“We are finding there’s some limitations from a range perspective with battery electric,” said Brian Cota, DTNA’s vice president of sales for national accounts. He and representatives from Penske and Shell, which also sponsored the GNA report, discussed best practices stemming from the report’s findings. Right now he said the eCascadia trucks are getting about 150 miles per charge. Within 90 minutes, they can charge back up to 80%.

Everything is fluid, even if the power source is not, so what doesn’t works for a fleet today might be the best choice tomorrow.

This might lead to more questions than answers for early adopters— more data equals more decisions. After all, fleets must choose between fuel or energy source, type of truck, OEM, applicable duty cycles, and several other variables.

Questions may change from month to month, going from researching to battery electric vehicles to looking at what incentives are available to install a propane fueling station.

When it comes to adding BEVs to a fleet, determining what moves to make and when takes due diligence and legwork.

That’s what worked for Penske.

“Get yourself educated, and then develop your strategy off of that,” said Drew Cullen, senior vice president of fuels and facility services for Penske Transportation Solutions. “Talk to your partners, talk to others in the industry, go out and take a look at the vehicles, get into them, drive them around, understand the costs, the maintenance, the efficiencies, the weight, the range. Use that to develop your strategy.”

For Penske, this means having its maintenance technicians crawl all over the vehicle to determine what is different than diesel, what new components must be learned about, and how that will affect various protocols and preventive maintenance routines.

Cullen stressed that “it’s okay if that particular alternative fuel or any of the ones that you had in the report aren’t really a good fit yet for your fleet.”

Renewable diesel may be a suitable bridge, and one many fleets look to be taking advantage of in California. Consumption of the fuel source tripled in the state from 2015 to 2019, now at 620 million gallons, according to the report. Renewable natural gas also rose substantially, growing 59% in Q4 2019 over Q4 2018.

Propane has performed admirably in the medium-duty space, while the long haul market could be dominated by hydrogen someday. Daimler and Volvo have a joint partnership on that front, while Cummins, Kenworth, Hyundai and Toyota/Hino are developing projects. The most attention lately has been on Nikola Corp., which hopes to offer leases for its fuel cell electric trucks, along with the fuel and maintenance, for $1/mile.

Hydrogen refueling is about 10 minutes, so far less than a BEV, though the price is twice the cost of gasoline currently. The GNA report noted that hydrogen costs halved from 2010 to the present, and industry goals are to reduce by another 50%, making it equal to gasoline.shell f

“We are betting on all these technologies because we believe that some of them are competing, but most of them are actually complementary,” said Giorgio Delpiano, vice president of fleet solutions at Shell. Shell is working on several sustainable mobility options and has a net-zero emissions goal of 2050.

Fleets are increasingly aware of emissions goals and want to know what type of vehicle is transporting their goods, which will drive the change to sustainable fleets even quicker. For smaller fleets, early adoption may provide a competitive advantage and “an opportunity to differentiate themselves in the marketplace,” Delpiano reasoned.

“For the fleet owners, what is really important is the understanding of the environmental impact and what some of the choices they make will have over time against their own customers,” he said.

Shell expects to accelerate its own investments next year, in preparation for a recovering economy. “When the economies pick up, there will be opportunities to drive these even faster,” Delpiano said.

“The best way to get into the transition is to be part of it,” he added.

The earlier a fleet begins its journey, the earlier it can uncover hidden advantages.

“There are tons of interesting things that we’re finding with this project,” Cullen said of Penske’s eCascadia pilot.

One of these has to do with how drivers manipulate the regenerative braking, learning to use the system as a new efficiency tool.

“When the vehicle comes back from doing the same run, day after day, we see the return state of charge getting higher and higher,” Cullen said. “And that’s because they’re starting to figure out how to drive these vehicles even more efficiently than when they first got them.”

“They enjoy driving them and it’s a new experience for them to learn how to operate them efficiently and be able to squeeze everything they can out of them,” Cullen concluded.