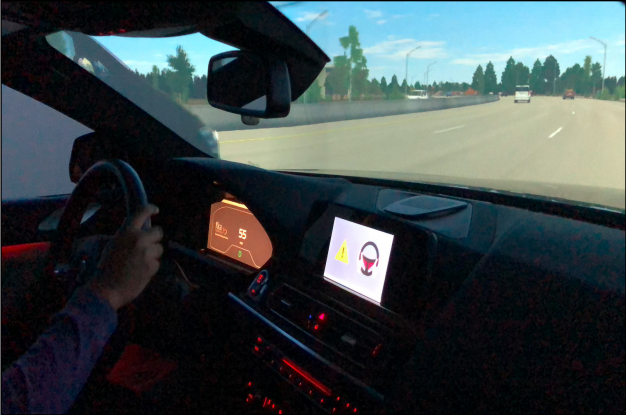 Each driver was placed in a car simulator capable of handling both human and autonomous driving. Photo courtesy of MTI.

As autonomous vehicles become more commonplace and automakers invest millions into the development of such technologies, consumers and researchers alike are left to ponder the implications of such technology failing during operation.

The study looks at how humans interact with AV’s if it loses control while on the road. It measured how quickly and deliberately the car alerted drivers and how efficiently the driver could effectively react and take control.

The study tested 40 individuals starting at 18 years old to 55 years plus. Each driver was placed in a car simulator capable of handling both human and autonomous driving. The test measured response times and vehicle drift from a centerline under several different scenarios.

Key results showed that between two different speed settings (high speed of 65 mph and a low speed of 55 mph), the lower speed yielded better performance. Out of all the three different age groups tested, the older participants performed better in overall driving and driving after autonomous technology failure.

Researchers also found that individuals tended to increase their speed and steer after taking control of the vehicles, as opposed to braking. About half of the drivers also reported not seeing the visual warning on the central console but did hear the auditory warnings.

The report takes into consideration how AVs can affect roadways and drivers. It gives suggestions on what mobility and infrastructure changes may need to be implemented to ensure safety while operating autonomous technologies.

Previous Post
Ford Executive Predicts Self-Driving Cars Will Only Last Four Years
Next Post
Who Is Winning the Race to Autonomy?