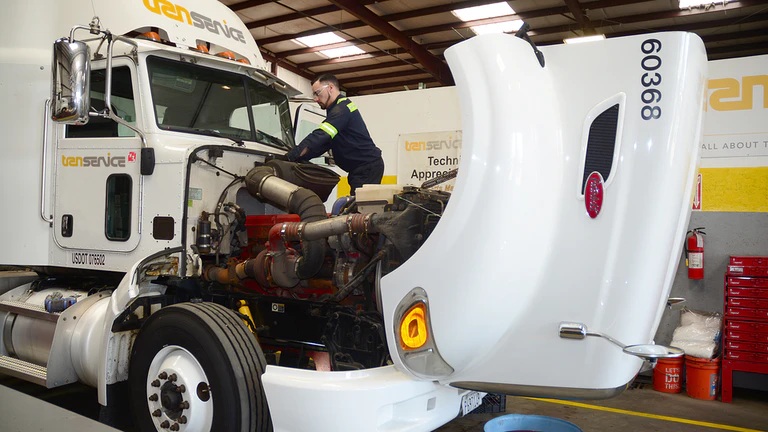 Passing a roadside inspection starts before the truck hits the road

Pre-trip and post-trip inspections, along with preventive maintenance, can go a long way to keeping freight moving and drivers in service.

Anything that slows a truck driver can cost a fleet. A truck that breaks down on the side of the highway means a costly roadside repair and lost revenue because a shipment is delayed. It also means less on-duty time for a now detained driver. Preventive maintenance along with pre-trip and post-trip inspections by drivers can go a long way in helping them and their fleet be more productive and profitable. That time invested before and after trips can also be the difference between passing and failing a roadside inspection.

A roadside inspection done by law enforcement is at an officer’s discretion, Fred Fakkema, vice president of safety and compliance for Zonar Systems, said. “When they come through the weigh station, the enforcement officers get all the data that they need — whether the driver or the fleet has a good safety rating or not. But it’s really the low-hanging fruit, the easy thing that you can see, which you should find on your pre- and post-trip inspection: lights, mudflaps, windshield wipers, tires. They are all No. 1 violations on a roadside inspection,” Fakkema told FleetOwner.

As a former captain with the Washington State Patrol, where he led its commercial vehicle enforcement division, Fakkema knows his way around a roadside truck inspection and roadway safety. He said the best way for truck drivers to pass is to perform pre-trip and post-trip inspections of their own. Carriers that use a system like Zonar’s Electronic Verified Inspection Report “have seen a dramatic decrease in those inspection violations,” he noted. “It’s really about the safety on the roadways.”

The potential for a roadside inspection incentivizes drivers and carriers to value safety in and around the vehicles, according to Steve Vaughn, a former California Highway Patrol chief of enforcement, who is now vice president of field operations at PrePass Safety Alliance.

Safe drivers and safe roads begin with a pre-trip inspection, which also helps drivers be more productive, Vaughn told Fleet­Owner. When discussing pre-trip inspections, Vaughn urges fleets to reinforce the importance of them with the drivers during training sessions. “Talk up pre-trips as frequently as possible,” he stressed.

Vaughn said fleets that do spot checks of recent driver citations or other out-of-service violations should look at “how many of those could have been corrected by a proper pre-trip inspection.”

If, for example, a driver gets cited for missing or loose lug nuts or bald tires, that should have been caught on the pre-trip. “That’s something that didn’t just happen after they left the terminal,” he said. “Those are things that generally occur in or on the truck before the driver leaves.

“There are a number of things carriers can do,” Vaughn continued. “Reinforce the training, reinforce the message that you need to do your pre-trip, do some spot checks to make sure that violations are not occurring that should have been caught in the pre-trip, and maybe even have some type of incentive program.”

Gino Fontana, a vice president of operations for Transervice’s Berkeley Division, has found success with a pre-trip inspection incentive program like a scavenger hunt for drivers in his fleet.

“We would be very happy, for example, if every driver on every pre-trip checked the fluid levels of the truck,” Fontana told FleetOwner. “There’s probably room for improvement, so we’ll put things on the dipstick like a coupon that says, ‘If you find this, turn it in to the shop for a $5 Subway gift card.’”

That tells the fleet managers a driver is paying attention, Fontana noted. And if the coupon is dirty and looks like it’s been under the hood for two weeks, the managers will know that the truck was driven without thorough pre-trip inspections.

The key to passing a roadside inspection, Fontana said, is preparation. “That comes in a few forms. The driver’s pre-trip and post-trip is really the most critical piece of this because they’re the eyes of a fleet, and the pre-trip is an opportunity to catch anything that can be caught.”

To Fontana, however, a post-trip inspection is even more important than a driver’s pre-trip inspection. “That is because if a driver finds something on a pre-trip — like a flat tire or a leak, or a light that’s not working — that driver is trying to get out of the gate and is already on the clock,” he said. “Once hours of service have started is not an optimum time to have to pull into the shop.”

Even if a flat tire or faulty light can be fixed in 20 to 30 minutes, that’s time that gets charged to the driver, Fontana added. But if a driver finds those types of problems on a post-trip inspection, he can alert the maintenance crew about it so the problem can be resolved, and the truck is ready before the next driver conducts a pre-trip inspection.

The work before and after a trip can “really impact the bottom line — not only for the driver but for the carrier,” Zonar’s Fakkema said. “When you do a proper post- and pre-trip inspection, not only does it save funds for the fleet, but it makes them more efficient as well,” he added. “Most drivers are still being paid by the mile. If they get pulled in for a simple violation that could have been repaired during a proper pre-trip, their vehicle is not rolling, so they’re not getting paid. The carrier is not getting paid because their load is not being delivered.”

Just pulling into a weigh station with low air in a truck’s tires could open a driver to more problems. “The inspector is going to do a complete thorough inspection — not just a Level 3 or Level 2 walkaround,” Fakkema warned. “They’ll do a Level 1, 37-point inspection. They’ll crawl under the truck, and they’ll continue to look at everything. That leads into hours of service checks and everything else that goes along with the other requirements for a driver. So, it really opens up Pandora’s box just by not doing a pre-trip.”

There are eight levels of commercial vehicle inspections, the first of which is the most comprehensive, and others that focus on particulars such as a driver’s qualifications or a specific aspect of a vehicle. Other inspection levels deal with jurisdictions. Inspectors will check that the vehicle’s brake systems, cargo securement, coupling devices, driveline/driveshaft components, driver’s seat, exhaust systems, frames, fuel systems, lighting devices, steering mechanisms, suspensions, tires, van and open-top trailer bodies, wheels, rims, hubs, and windshield wipers are compliant with regulations. Inspections of motorcoaches, passenger vans, and other passenger-carrying vehicles also include emergency exits, electrical cables and systems in the engine and battery compartments, and seating.

The enforcement officers also look for critical violations detailed in the North American Standard Out-of-Service (OOS) Criteria published annually by the Commercial Vehicle Safety Alliance (CVSA). These pass/fail criteria can put a vehicle OOS until all conditions are corrected. Vehicles that pass a Level 1 inspection should receive a CVSA decal to display. That decal generally means a vehicle will not be subject to re-inspection for 90 days.

Here is how CVSA describes each inspection level:

Level 1 is the most comprehensive inspection. This includes a thorough vehicle and paperwork review along with a review of a driver’s record of duty status, hours of service and more. A vehicle that passes the Level 1 inspection receives an inspection sticker to display.

Level 2 inspections, also known as “walk-around inspections,” are similar to Level 1 but do not require the inspector to get under the vehicle.

Level 3 is an in-depth inspection of paperwork belonging to the driver, vehicle, and carrier.

Level 4 is the inspection of a particular feature, such as brakes or lights.

Level 5 is a vehicle-only inspection that does not require a driver to be present. It can be conducted at any location.

Level 7 is an inspection of vehicles that do not meet the requirements of other inspection levels. This could include people-moving vehicles such as limousines, taxis, school buses, hotel shuttles, and other intrastate operations.

Level 8 is an inspection conducted electronically or wirelessly while the vehicle is in motion without direct interaction with an enforcement officer.