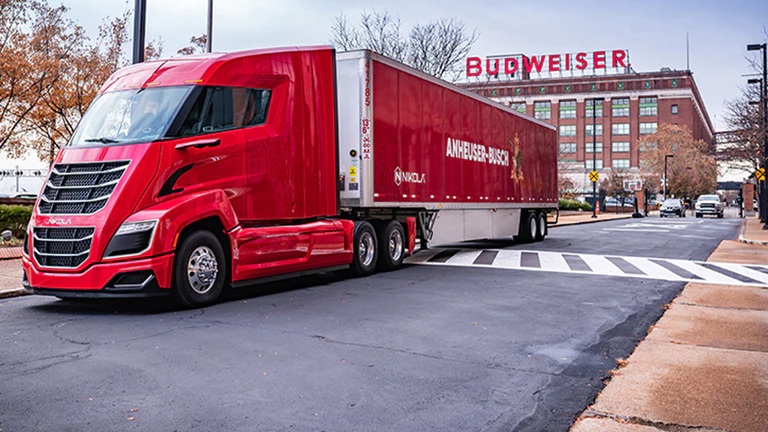 Nikola still on track for disruption, according to CEO

No truck maker has had a more tumultuous 2020 than Nikola Corp. The maker of battery-electric and fuel-cell electric drivetrain components and trucks, went from zero-emissions transport messiah at the end of spring, when the company went public, to being compared to Theranos—the fraudulent and now defunct medical device manufacturer once valued at $10 billion—shortly after Labor Day.

That’s when a short seller called Hindenburg Research released its now infamous report levying claims that the innovative hydrogen fuel-cell technology purported to make zero-emission long haul possible and inevitable was a sham and that Trevor Milton, Nikola’s outspoken firebrand founder and chairman, was a charlatan.

It could not have come at a worse time, as the company had broken ground on its Coolidge, Ariz., factory in August and just days before the Hindenburg Report dropped, had announced a groundbreaking partnership with General Motors, who would supply Nikola’s under-development Class 8 semis and pickup trucks with batteries and fuel cells.

Milton briefly fought the allegations before resigning. A November regulatory filing revealed the Securities and Exchange Commission and Department of Justice issued subpoenas related to the alleged fraud, which basically accused Nikola of misrepresenting its progress to investors. Nikola denies these claims.

The damage was done, though, as Nikola shares halved from $50 to Sept. 8, when the GM deal was announced, to around $25 currently.

Despite all of these tectonic shifts, Nikola’s new CEO Mark Russell portrayed Nikola as still having a foundation solid enough from which to disrupt the clean trucking sector and make a serious impact on climate change when he kicked off the latest ACT Virtual event on Nov. 17. 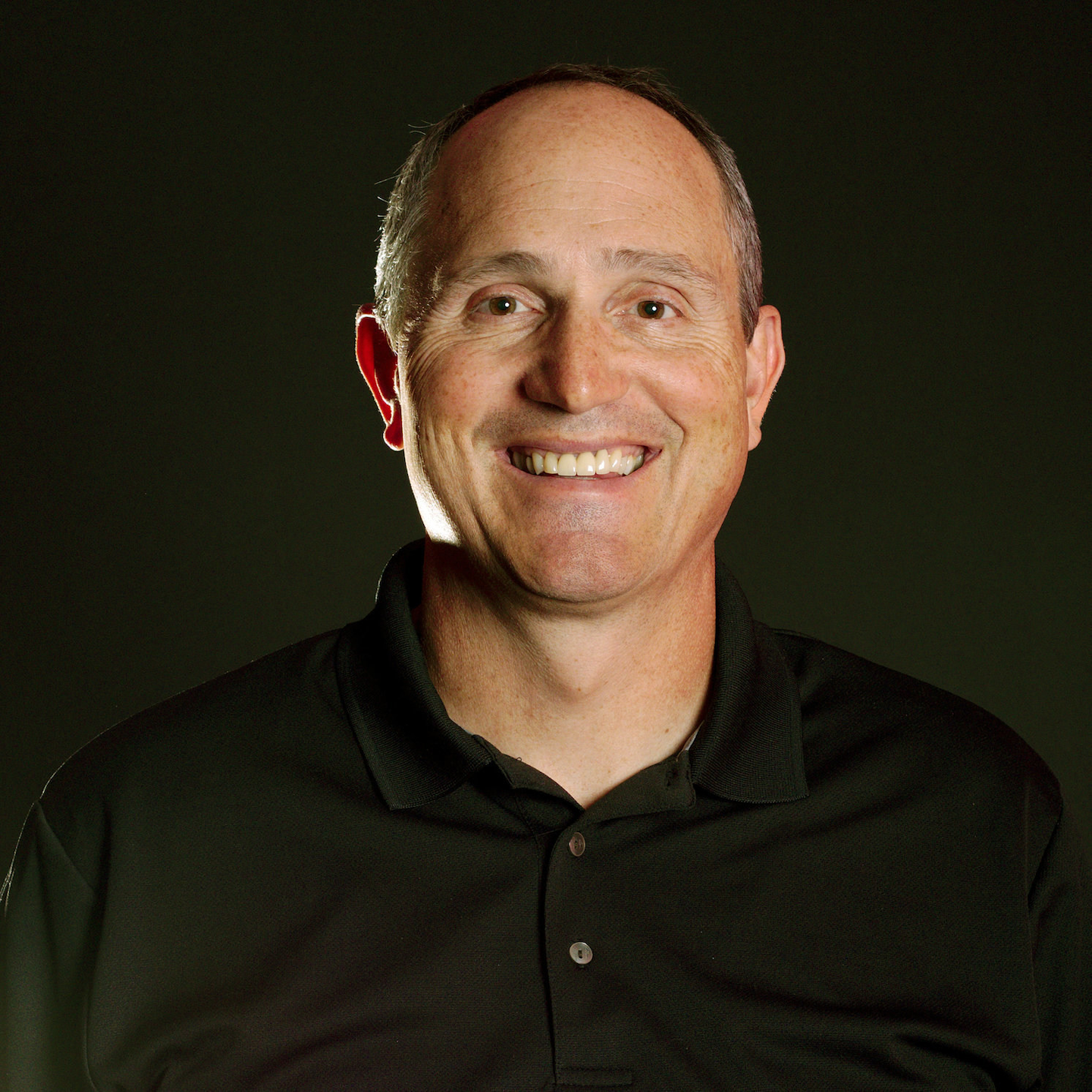 The company’s mission remains the same.

“Nikola was founded back in 2015, with a passion and a vision for a future that would be sustainable, that would be clean, and that would leave a better planet for all of those who come after us,” Russell said.

Here is the current timeline in which Nikola believes its solutions will be available to aid that sustainability effort: 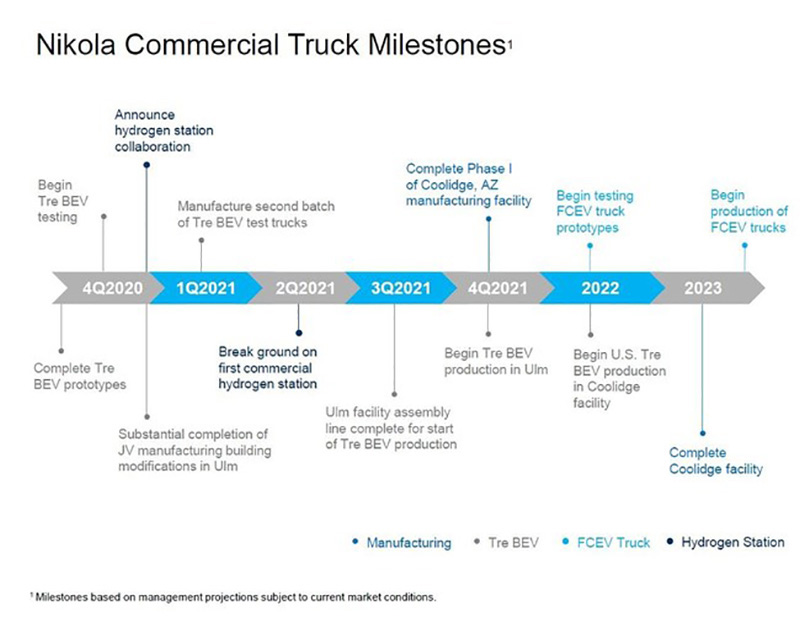 The CEO pointed to partnerships and investments from Bosch, CNH Industrial and Hanwha totaling $480 million.

Financial analysts agreed that network of partners is a major plus for Nikola.

“We think this core criticism is misconceived,” JP Morgan said in a statement shortly after the Hindenburg report was released. “We believe the ability to execute by leveraging other companies’ core competences – specifically GM, CNH and Bosch – is a major positive, not a negative. We also think speed, flexibility and unencumbered readiness to change course quickly with evolving circumstance in a fast-developing market are fundamental and desirable attributes of a disruptor.”

If the GM deal, worth $2 billion in Nikola stock, is not approved in December, Russell had previously stated Bosch and Romeo Power would provide the battery and fuel-cell components.

Once the company starts producing trucks next year, initially rolling out the Class 8 Nikola Tre in Ulm, Germany, out of an Iveco plant.

“The first batch of prototypes will be completed this year, and will begin validation and testing and regulatory approvals,” Russell said. “We’ll have another batch of those prototypes next year, and then we’ll move into serial production next year.”

Once that happens, Nikola will have a very large customer base hungry for ZETs.

“Carbon emissions from heavy trucking and from transportation in general have grown faster than any other segment of the economy,” Russell noted during the ACT keynote. He added that like European nations that have already set forth carbon neutral goals in the next 15 years (with Norway aggressively targeting 2025), the U.S. must “get rid of fossil fuels and start moving towards a zero emission future for heavy transportation and commercial trucking.”

Many states have already taken broad steps to push the adoption of zero-emission trucks (ZETs), with California leading the way. Through the California Air Resources Board, the state has provided funding for several projects, including battery-electric truck pilots with OEMs Daimler Trucks North America and Volvo Trucks North America, respectively. DTNA’s eCascadias, due out at the end of 2021, have accrued half a million miles. BYD also announced DHL will deploy its Class 8 electric trucks in the Los Angeles area. DHL projects its deployment could remove 300 metric tons of greenhouse gas emissions annually.

“Now you’ve got other states catching up to and even talking about passing California, and other forward-thinking leaders are talking about making these kind of things nationwide, which we support,” Russell said.

California and 14 other states, along with Washington D.C., signed the Multi-State Medium- and Heavy-Duty Zero-Emission Vehicle Memorandum of Understanding to incrementally increase the sales of ZETs to 30% in those areas by 2030. And with the Biden-Harris administration poised to take over the executive branch in January, a national push towards electrification is a foregone conclusion. President-elect Joe Biden’s infrastructure plan prominently features electric vehicles and charging infrastructure, while Vice President-elect Kamala Harris co-sponsored the Green New Deal.

The Tre and BEV version of the Badger pickup truck will benefit from any incentives and electric infrastructure provided by the government, though it remains unclear how much federal effort and funding hydrogen vehicles will receive in the next four years.

The inaugural crop of electric trucks are limited to a range of under 300 miles, keeping them bound to regional and drayage duty cycles, so for zero-emissions trucking to become a universal solution by the current timetables, hydrogen must also be developed.

“Hydrogen has many advantages besides the fact that the zero emission,” Russell said. “It’s so energy dense as a fuel. When batteries are trying to move something heavy far distances, you start to run into the problem of energy density.

“The amount of energy in a kilo of hydrogen is the equivalent of about three kilos of fossil fuels,” he continued. “It’s the only thing out there that we know of that can beat fossil fuels as a transportation fuel.”

Recently, most of the traditional heavy-duty OEMs have also explored fuel-cell powertrains. Kenworth and Toyota have had a partnership in place since 2019 to fit the Kenworth T680 with fuel cells. Toyota Motors North America and Hino will also begin testing fuel-cell electric trucks (FCET) based off the Hino XL Series on North American roads in 2021.

“A fuel cell-powered version of the Hino XL Series is a win-win for both customers and the community. It will be quiet, smooth and powerful while emitting nothing but water,” said Tak Yokoo, senior executive engineer with Toyota research and development

Daimler AG and Volvo Group also formed a strategic partnership this summer, which became a binding agreement in November.

“For us at Daimler Truck AG and our intended partner, the Volvo Group, the hydrogen-based fuel-cell is a key technology for enabling CO2-neutral transportation in the future,” said Martin Daum, chairman and member of the board of management at Daimler Truck AG. “We are both fully committed to the Paris Climate Agreement for decarbonizing road transport and other areas, and to building a prosperous jointly held company that will deliver large volumes of fuel-cell systems.”

Daimler has tried to develop a feasible way to convert liquid hydrogen to electricity since the 1990s. Series production on the first Class 8 FCET, the Mercedes-Benz GenH2 Truck, is slated to begin sometime after 2024.

Navistar has also partnered with Cummins to develop a fuel-cell option of the International RH Series.

“This vehicle will feature our next generation fuel-cell configuration and provides a springboard for us to advance our hydrogen technology for line haul trucks,” said Amy Davis, vice president and president of new power at Cummins.

Hyundai Motor Co. may be the first to market with its XCIENT Fuel Cell trucks in 2022. Testing should begin next year.

While the questions around electric truck charging are currently being practically figured out and vetted, understanding how to realistically install the hydrogen stations to power fuel-cell electric trucks is still in the nascent stages.

“We had to solve the chicken-and-egg problem that’s always been involved when you’re talking about hydrogen fuel-cell vehicles,” Russell said.

They believe they have solved that problem and have 700 hydrogen stations planned in the U.S. and more plans to grow in the European market over the next decade in three phases.

Nikola has also joined a consortium to fuel heavy-duty FCETs that includes Hyundai, Toyota, Air Liquide, Nel and Shell. This will help standardize components such as hoses, nozzles and receptacles, Russell said. The fact that FCETs can fill up in the same time as a diesel truck, versus several hours for EVs, is another major selling point.

Russell noted that right now the trucking industry spends $100 billion a year on fuel and maintenance. His predecessor Milton said last May that bundling these costs could make a Nikola FCET 20 to 30% less than a diesel truck.

More importantly, Russell stressed, is that the company’s overall mission to improve air quality is still on track.

“Nikola is about establishing a safe, clean, sustainable, zero emission future for all of us on this planet and helping to solve one of the toughest problems, which is how do you get heavy things, long ways across far distances,” Russell concluded.