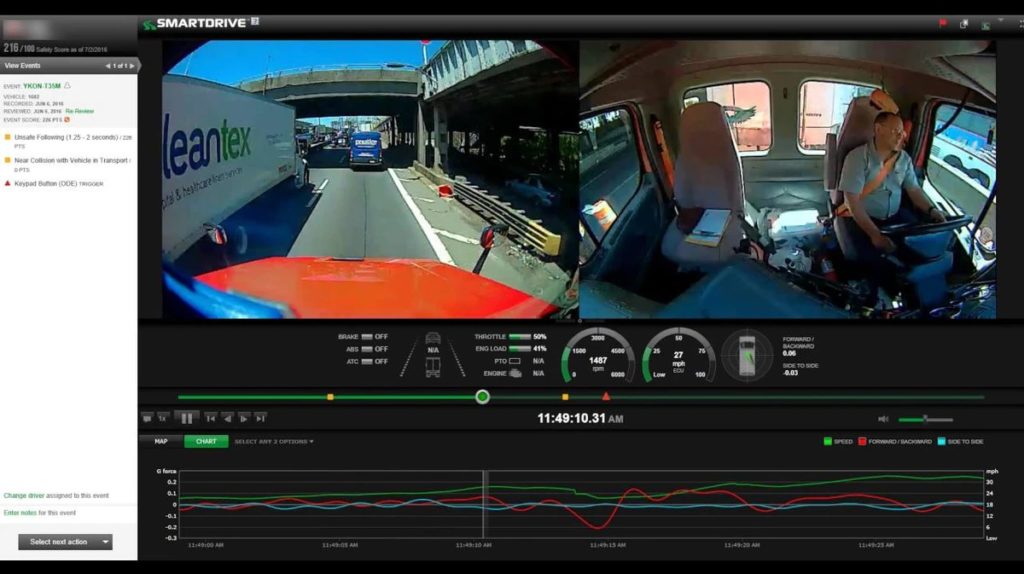 SmartDrive leaders share reasons to think of video safety technologies as investments instead of costs for carriers looking to improve safety and customer service.

More than one in three long-haul truck driver has been in a serious truck crash in their career. While crash deaths of occupants of large trucks held at about 5,000 between 2018 and 2019, non-commercial traffic deaths dropped 2% over the same period despite a 1% increase in vehicle miles traveled, according to the National Highway Traffic Safety Administration.

Don Osterberg, a former senior VP of safety, security and driver training at Schneider National, who now serves on SmartDrive’s Board of Advisors, said the first response from people in the trucking industry is that “the problem is the four-wheelers” when it comes to highway safety. But the latest numbers show non-commercial drivers are getting safer.

Osterberg led a Truckload Carriers Association and SmartDrive webinar on Nov. 17 about how to maximize value from fleet safety programs. He stressed the “moral imperative that we have as transportation professionals to operate safely.” But also, Osterberg talked about how safety technologies can create financial gains for fleets of all sizes. “For those who creatively procrastinate with the notion that the next generation of safety technology will be better — of course, they’ll be better,” he said. “But the ones today are good enough and a good investment to make.”

The trucking industry needs to strive to be safer, Osterberg said. “We can’t accept the negative trend line that we’ve seen in trucking crashes, injuries and fatalities,” he said. “So first, create a strong safety culture that’s critically important for the efficacy of any of the technology solutions that you invest in.”

Commercial trucking insurance premiums are on the rise and even safe fleets aren’t immune to this, Osterberg noted. A big reason is that nuclear verdicts are on the rise (the median payout is $1.7 million over the past decade — but that number is on the rise). Fleets are also relying on more drivers with less experience as a driver shortage continues to impact the industry. Deteriorating infrastructure across the country along with more in-cab distractions are contributing to the perceived risk. All of this is leading the providers who aren’t exiting the trucking industry to be ultra-selective about which carriers they will insure, he explained.

According to SmartDrive data, video-based safety systems can reduce insurance claims and costs by:

Drivers are leaving jobs now as freight demand is on the rise. Osterberg said the industry is not attracting enough new drivers to stem this loss. The American Trucking Associations estimates the driver shortage could top 100,000 positions in the next five years. Adding to the uncertainty is that more fleets are working to lure drivers by offering high driver sign-on bonuses.

SmartDrive contends that video-based safety systems, like the platform it offers, can improve driver satisfaction and retention by:

The trucking industry consistently ranks among the top five occupations with the most workplace injuries, according to Byrd. He said the potential for injury is significant for truck drivers because of all the on-the-job risks.

In trucking, most workers’ compensation claims come from injuries sustained during loading, unloading, slips, trips, falls, strains from entering and exiting the vehicle, repetitive body movements over long periods of time, falls from loading docks, handling heavy equipment and materials, and collisions, Byrd described. He noted that 27% of claims are attributed to slips, trips and falls while 17% come from collisions.

Fuel and maintenance costs are the second most costly aspect of running a fleet — behind the driver salaries. Even a small gain in miles per gallon can lead to big fleet savings, Byrd said.

Video-based safety systems, he said, can reduce fuel costs by:

With fierce competition in the freight space, it’s important for carriers to differentiate, Osterberg said. Customers and the public are more likely these days to report unsafe driving by fleets. Without recordings, some deliveries as be marked as missed. Low CSA scores can reflect badly on customers, encouraging them to go with fleets with better safety scores, he said.

Osterberg shared some ways that systems such as SmartDrive have shown to improve customer service:

According to SensiGuard, there was a 17% increase in cargo thefts in the U.S. in 2019. The average loss was valued at $188,000. Some larger carries have had at least one full truckload stolen per week, Byrd said. He added that thieves are “shopping cargo” by breaking trailer seals to check out what’s in the truck, which even if they don’t steal it could contaminate the contents. Cargo is also being stolen, he added, because it wasn’t properly secured.

Video, Byrd said, can help deter cargo theft and ensure it is properly secured by: