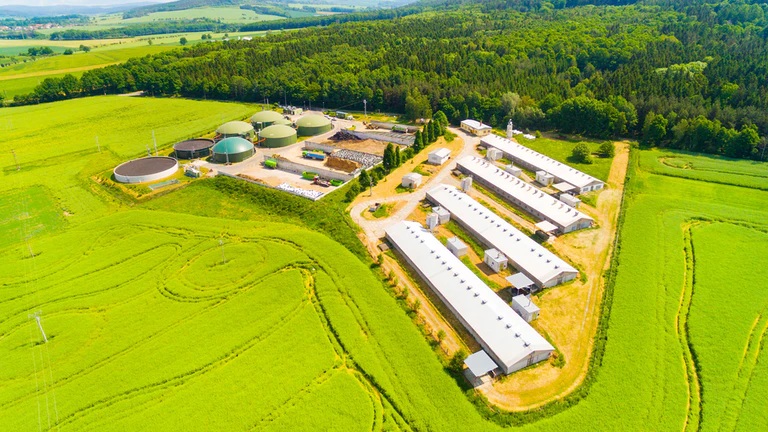 Negative impact of RNG trucks a positive for environment

By leveraging RNG trucks, it’s a matter of emission subtraction by addition.

This year the months of shutdown factories and closed businesses, along with fewer vehicles on the roads, have helped decrease greenhouse gas (GHG) emissions in the U.S. to their lowest since 1983, according to BloombergNEF research.

Overall, the GHG output is 9.2% lower than 2019. This was largely driven by the declined activity in the transportation sector, the data showed. Specifically, the sector dropped by nearly 15% year-over-year, or -265 MtCO2e (metric tons of carbon dioxide equivalent).

While that’s great news, it’s by no means sustainable. Neither the U.S. population, nor its economy, can thrive while locked down, and that’s apparently what it took to make such a dent. Earlier in the week, though, a report by the California Air Resources Board (CARB) revealed a pathway to less dramatic, though absolutely sustainable, drops in GHG. For Q2, California’s Low Carbon Fuel Standard (LCFS) program reported its natural gas fuel portfolio was -0.85 gCO2e/MJ. That means vehicles running on natural gas had a net negative impact on the air quality.

“It’s the first time in the history of the program that the average CNG CI [carbon intensity] value has dipped below zero,” said Cliff Gladstein, president of Gladstein, Neandross & Associates (GNA), a clean transportation and energy consulting firm.

Renewable natural gas was a leading factor in driving that CI score down. Sometimes referred to as biomethane, RNG can be harvested from decomposing organic material at dairies, pig farms and landfills and turned into a usable fuel source for commercial vehicles. As more farms and waste sites realize the untapped potential of these energy reserves, that negative impact could increase.

“Our research indicates that the California component of RNG supply is going to drag that that CI value even lower,” Gladstein noted. “Roughly three years from now, when proximately 160 new RNG production projects are online in California, the CI average of California-produced RNG will be -102.”

A diesel truck produces a CI score around 100, so replacing one of those with an RNG truck will be like removing the GHG emissions of two diesel trucks.

Gladstein, like many other experts on clean trucking, believes truly addressing the emissions challenge will take several solutions, ranging from fuel cells to biodiesel.

“There’s no reason why we should be putting all of our eggs in one basket,” Gladstein said. “Let’s have as many baskets and as many eggs as possible.”

The catch is that they all have to be solutions that work for the fleets running them.

“What’s most important is that they work for those who operate the technology, those who actually have to drive the trucks, and they’ve got to work in terms of performance and be cost effective,” Gladstein said.

So far, the new wave of zero-emission and near-zero-emission trucks have found niches in which they excel, though fleets must concede in one area or another. For instance, electric trucks themselves don’t generate emissions at the tailpipe, as they don’t have any, but they sacrifice range.

Best of both worlds

Austin-based Hyliion, which provides hybrid electric drivetrain solutions, will soon have a heavy-duty option that meets Gladstein’s criteria by pairing an electric powertrain with an onboard RNG tank to extend the range up to 1,300 miles. The Class 8 hybrid, called the Hypertruck ERX, will be available on a limited basis in 2021 and at volume in 2022. Installation will occur at the installer and later at the OEM-level. The Hybrid Diesel solution for Class 8 trucks is available now. 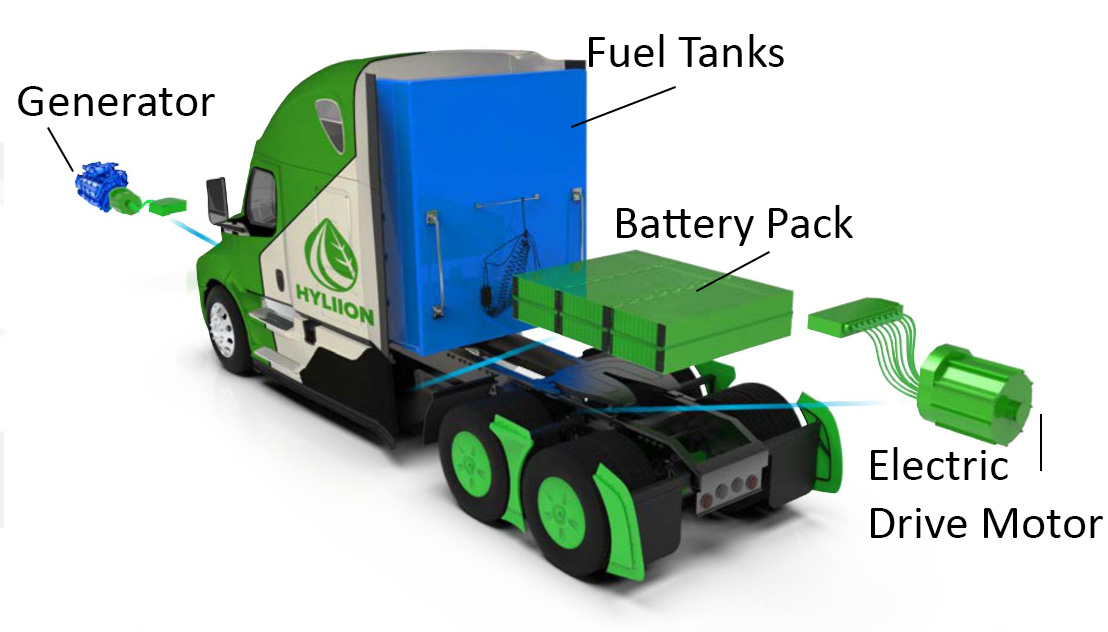 He also noted the nation’s ability to capture biomethane that otherwise would become a GHG is currently being underutilized. Realizing that potential could create thousands of clean energy jobs and provide a new source of revenue for the agricultural sector while providing that net-negative GHG benefit.

The company projects the seven-year total cost of ownership will be under $280,000, about 35% better diesel trucks and 36% better than the unreleased Tesla Semi, based on the numbers the secretive Elon Musk-led company has divulged. The ERX could also be 56% more cost effective than the Nikola Two, a fuel-cell electric truck due out sometime after 2023. 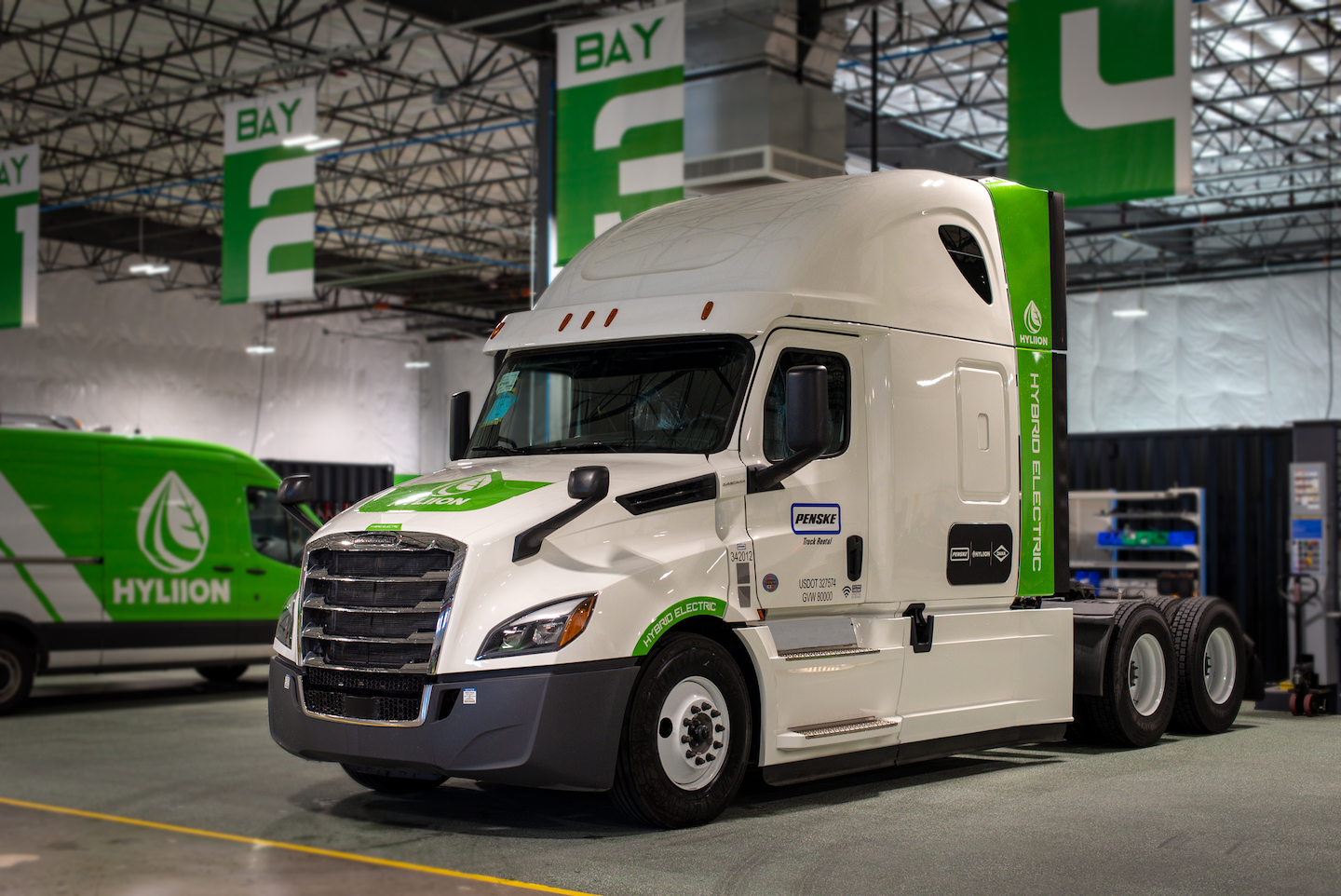 Penske has been an early adopter of the Hyliion Hybrid Diesel solution.Photo: Hyliion

One test fleet said it expects to save $15,000 per year in fuel costs annually for every Hybrid Diesel it deploys.

“The cost of natural gas today is significantly lower than even the future projected hydrogen and future projected electricity of grid costs,” Healy said. He also recalled a CARB study that indicated “electricity that’s generated and sold in California is actually more polluted than if you just use natural gas.”

The cells will be produced by Toshiba and the electric motors and axles will come from Dana Inc. Assembly will also take place at a Mexican Dana plant.

Healy said a big reason the Hypertruck could be successful is that its trucks, which also include a hybrid diesel product, are using many existing components familiar to the trucking industry.

“We’re bringing you a new powertrain and we’re letting you use the same exact existing chassis that you already know and love,” the 28-year-old CEO said. “And we’re leveraging an already existing infrastructure. And I think that’s the strategy difference.”

Hyliion expects to produce 2,500 Hypertruck systems per year in a few years, with 10,000 units per year at full scale.

“We’re not inventing anything over the next couple of months to make this product successful,” said Hyliion CTO Patrick Sexton. “We’re leveraging off-the-shelf validated technologies, with really reputable Tier Ones that have a good knowledge of the Class 8 industry.” 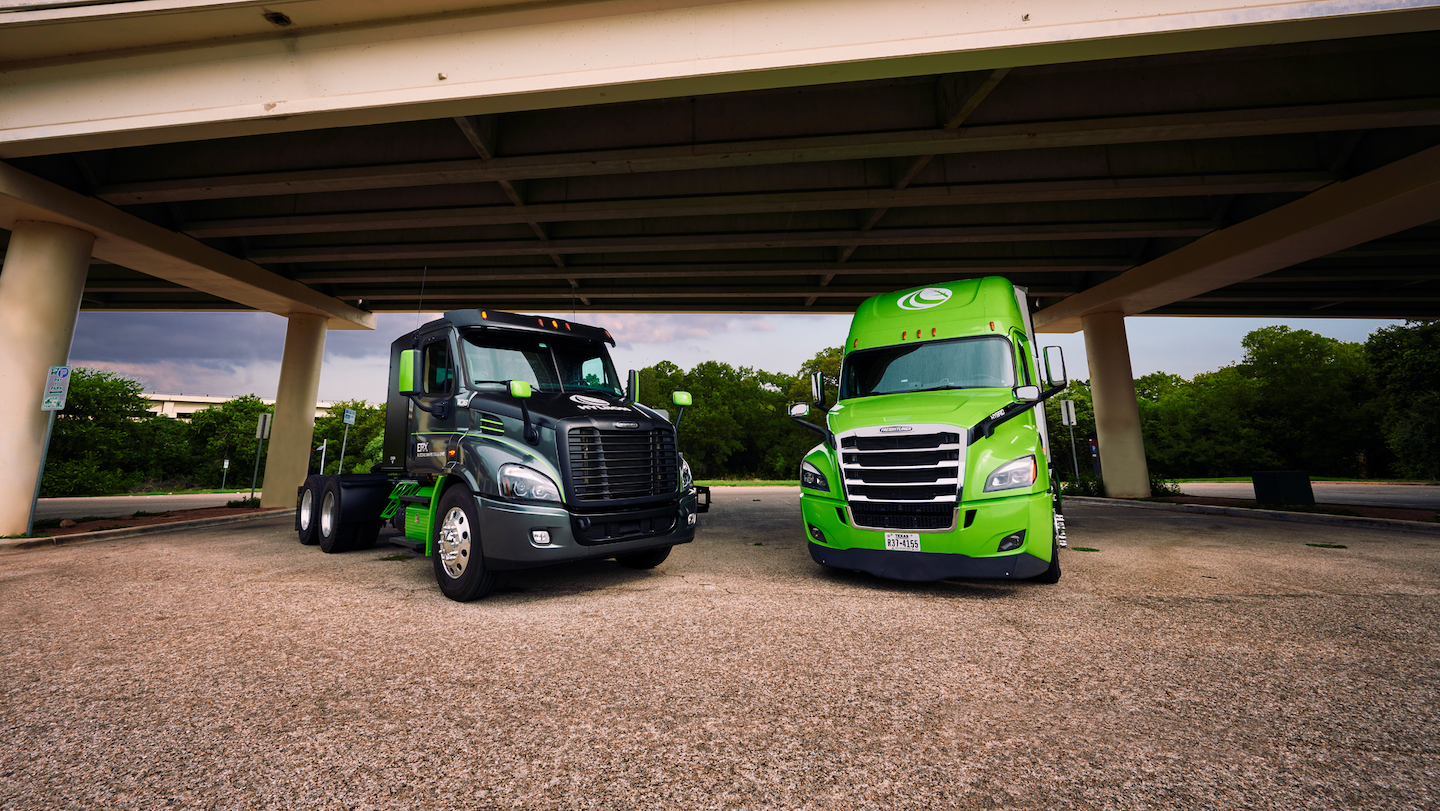 The Hyliion Hypertruck ERX (left) and the Hybrid Diesel (right).

RNG may not be the best solution in 10 years as battery and fuel-cell technology evolves, but for now it may at least help keep transportation’s impact on air quality lower as the economy starts to recover from the pandemic and the wheels of industry begin to turn faster.

“It looks promising,” said Gladstein of the Hypertruck. “I think, like with everything else, the proof is going be in the pudding. The important things to get the cleanest technology out there right now, and not to allow the perfect to be the enemy of the very, very, very good.”