Electric-powered light commercial vehicle (LCV) orders from delivery companies have been rising exponentially over the last couple of years but are these fleet operators jumping the gun or is this a good strategy?

Considering the measures taken by some of the world’s largest logistics and delivery companies for last-mile delivery solutions recently, going electric does seem like a good idea.

Some of the latest orders for e-delivery vehicles include a recent request by UPS for 10,000 electric trucks from UK-based start-up Arrival and a mega-order by Amazon last year for 100,000 electric vans from Rivian. The table below shows some of the largest EV fleet operators in Europe and North America and the OEMs they’ve partnered with. 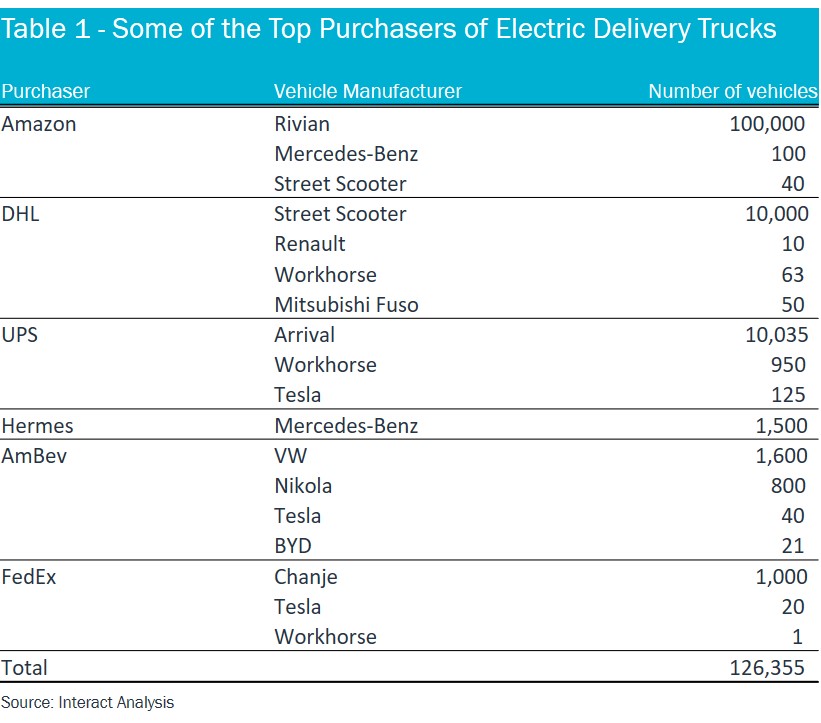 “Between 2019 and 2025, we forecast just under 2 million electric light-duty trucks will be registered across Europe and North America,” says industry analyst Rueben Scriven of market research firm Interact Analysis.

The number of orders Rivian, Arrival, Chanje and Workhorse have already received accounts for more than 6% of the total forecast volume, not to mention the deals they will win during the forecast period, added Mr. Scriven.

With orders like these, much leverage is gained on such scales so reducing TCO (total cost of ownership) is much easier as you can negotiate per unit cost. However, many companies are not in the position to order thousands of units. If that is you, make sure you weigh out your costs carefully before making the move to electrification.

In addition to the cost of vehicles, other determining factors are the cost of energy, the recharging infrastructure available, and the profile of your fleet. As for energy costs, it really depends on the country.

For instance, in Norway where some 80% of the new vehicles being sold are hybrid or electric vehicles (EV), the cost to run a vehicle on electricity is approximately nine times less than running one on petrol or diesel so transitioning to EV makes sense in most cases.

Countries in other regions of the world seeing a significant break in energy costs when going electric are China and Argentina where electricity is approximately eight times cheaper. As for countries where going electric is not as beneficial, electricity in Germany is half the price and in Ecuador, about a third.

Regarding recharging infrastructure, this is something that is being improved in many countries around the world and this is likely to continue at a faster pace in the upcoming years.

Finally, the profile of your fleet makes a difference. In a nutshell, a fleet vehicle needs to run at least 250km per day – on average – and it should not be traveling long distances in rural areas where recharging infrastructure is lacking.