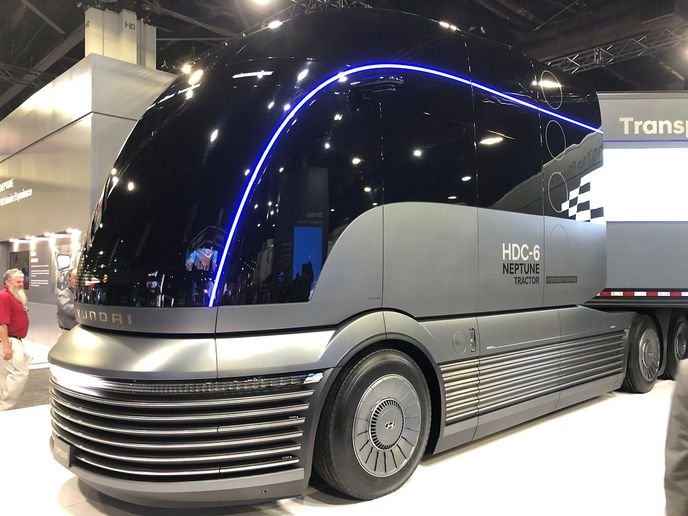 Disruption Can Bring Anxiety or Opportunity: The Choice is Yours

Disruption Can Bring Anxiety or Opportunity: The Choice is Yours

The Hyundai HDC-6 Neptune concept truck turned heads at the NACV Show in Atlanta and signaled that Hyundai has not given up on its dream of one day playing in the North American Class 8 market.

In 1978, my family took a trip to South Korea. My father was in the Air Force and stationed at Yokota Air Force Base in Japan. So, getting to Seoul was as simple as hopping on a Military Air Command transport headed that way.

I’ve always noticed cars, trucks and planes. I was very familiar with Japanese cars of the time — the majority of which were not sold in the U.S. And I was curious to see what the Koreans drove around in. And I was in for a disappointment — the cars on the road there were all Japanese as well. In fact, they were the very same models of Nissans, Sunnys, Toyotas, Hondas and Suzukis.

Flash-forward 20 years, and I returned to South Korea for work. And I was astounded to see that in the two decades since I’d last been there, the South Koreans had ramped up their own domestic automobile industry and completely expelled the Japanese. Streets once full of Nissans and Toyotas were now jammed with Hyundais, Kias and Daewoo cars, trucks and buses. In fact, I could only recall seeing one Japanese car the whole time we were in South Korea, an older model Toyota Century — a model that’s not sold here, and is kind of like their version of a Lincoln or Cadillac limousine.

There were some extenuating circumstances behind this automotive upheaval, of course. The South Koreans (and the Chinese, for that matter) still harbor a lot of ill will toward the Japanese over that whole Greater East Asia Co-Prosperity Sphere experiment that ended abruptly in 1945. But still, to completely uproot a major established, entrenched automotive industry and supplant it with your own domestic vehicles in just two decades is a stunning achievement. And I’ve taken the South Koreans seriously as an automotive and technology leader ever since.

For years now there have been rumors that the South Korean vehicle OEMs, namely Hyundai, were very interested in getting into the North American Class 8 truck market. Hyundai builds world-class commercial vehicles that are a common sight on European and Asian roads. And eking out a spot in the most competitive, high-profile truck market in the world would be a feather in Hyundai’s cap and bolster their standing as a serious player in the global automotive markets.

In the late 1990s, Hyundai made a run at the U.S. with a slate of vocational models re-branded as Bering Trucks. But nothing much came of the effort. And every few years after that, a rumor about Hyundai bringing its Xcient Class 8 cabovers to the U.S. as a sort of economy option for long-haul fleets would bubble up. But nothing ever happened.

Until the North American Commercial Vehicle Show (NACV) in Atlanta in late October, when the South Korean auto giant created a buzz with its futuristic HDC-6 Neptune concept truck. The futuristic-looking Class 8 tractor featured a host of advanced features, most notably a hydrogen fuel cell power system, which converts hydrogen fuel into electricity that is then used to power electric drive motors on the truck.

As more than one foreign OEM can attest, North America is a tough nut to crack when it comes to heavy trucks. Relationships between dealers, fleet owners and even OEMs stretch back decades. American trucks have long been engineered exclusively for American tastes. And dealer networks — perhaps the most critical component to any effort to sell heavy trucks over here — are notoriously difficult, expensive and time-consuming to establish.

But disruptive times change those traditional calculations dramatically. Hyundai made clear in its press conference at NACV that has long-been a major player in hydrogen fuel cell technology — deploying its first trucks with this alt fuel technology almost 20 years ago in Germany. And while there’s still an uphill battle to be had breaking into North America, having an early lead with an emerging technology like hydrogen levels the playing field considerably.

A lot has to happen before we see Hyundai Class 8 hydrogen trucks rolling down I-40 west of Little Rock. But the HDC-6 Neptune is a timely reminder for all of us that disruptive times can bring anxiety. Or they can bring opportunity. It all depends on how you choose to deal with them.

As a licensed commercial driver, HDT senior editor Jack Roberts often reports on ground-breaking technical developments and trends in an industry being transformed by technology. With more than two decades covering trucking, in Truck Tech he offers his insights on everything from the latest equipment, systems and components, to telematics and autonomous vehicle technologies.