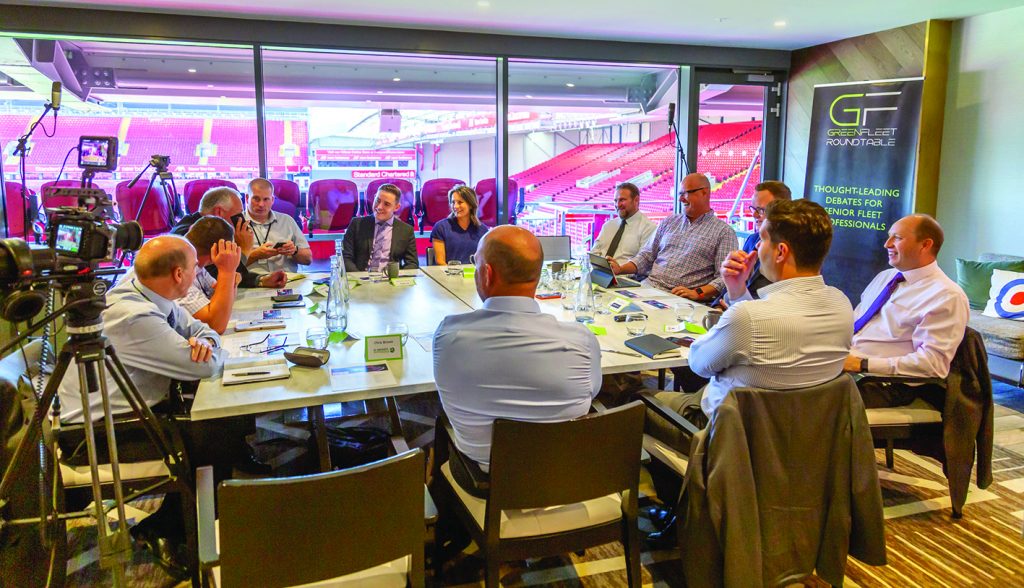 Roundtable: Driving the move to an electric vehicle future

Roundtable: Driving the move to an electric vehicle future

When it comes to buying electric vehicles and charge points, the pace of change in technology worries fleet managers. This and other challenges were raised at the GreenFleet Roundtable at Liverpool’s Anfield football stadium on 20 September

As the sun rose over, arguably, the most famous gates in British football at Liverpool’s Anfield Stadium, a panel of business people and public sector officials took their seats for the latest in our GreenFleet Roundtable events.

As the delegates arrived on Friday 20 September, the haunting yet supportive words of the Kop anthem rang out: “You’ll Never Walk Alone,” and this is so true of all the GreenFleet events. The journey to utilising more low emission and electric vehicles is similar to a game of football in so many ways. The result will come in time, the game needs passion and skill to deliver the result but ultimately without teamwork all the effort in the world will not bring the outcome you desire. Be they league points or charge points collaboration at such as at GreenFleet Liverpool delivers.

The delegate panel was comprised of a number of public sector bodies and private sector fleets operators. Some had started their journey in delivering a number of electric and hybrid vehicles and for some they were right at the very start.

We kicked off the discussion sessions with a chat about the key elements of change that organisations need to make to begin to use electric vehicles. Interestingly. The number one change was not about buying new vehicles or installing charge points but rather taking people along on the journey. Whether it is senior managers within the organisation who need to sign off funding, or drivers who need to operate the vehicles, behaviour change is the single biggest component to ensuring a successful transition programme.

Alan Dennis, head of transport at Phoenix Medical put it best when he said “behaviour change is key too getting people to use electric vehicles. People need to have their fears taken away”.

David Robinson, group fleet & PPE procurement manager at Morton International went further when he suggested that not only do companies benefit from ensuring better driver behaviour but that driver responsibility can be tackled when bringing in new technologies and vehicles.

This brought the discussion nicely to how telemetry and software can be used to provide data and evidence to benefit the company whilst protecting the driver and other road users.

A straw poll around the room found that telemetry was not widely used by delegates businesses. Fears still abound that telemetry is nothing more than a way to cut jobs, pressurise drivers and a form of entrapment. There is suspicion that the little black box in the cab is spying.

Sarah Bee from Trakm8 set out how telemetry can be used to manage efficiency and cost, but also as a way to safeguard drivers in terms of providing evidence for disputed insurance claims. Traditionally a little black box fitted to the OBD port inside the cab would be accompanied by a dash cam giving fleet managers a suite of data. However, this is now combined into Trakm8’s award winning RH600 single telematics and camera unit. Trakm8’s technology supports not only monitoring of journey cycles but also in identifying opportunities for further efficiencies in route planning, and where electric vehicles might have a part to play as part of the fleet mix. As Sarah said: “Utilisation data can be used to identify whether you really need certain fleet vehicles and how they are used  to protect drivers and their jobs.”

Alan Dennis at Phoenix Medical already utilises telemetry. He said that there was initially some resistance, by providing information about how the system works and what its function is, drivers do understand that they are being looked after as they go about their jobs. Indeed, some commercial vehicles are coming already fitted with telemetry, signalling the industry’s support of the technology.

Paul Dawson from SG Fleet gave an example of a client that has been able to reduce its fleet by having vehicles utilised better and the “standby fleet” reduced, which led to significantly improved utilisation.

The panel all agreed that introducing electric vehicles is a great opportunity to revisit the way the fleet is run and to enforce better operator and driver behaviour.

As with any new technology the appropriate training is key to get the best from the investment in and operation of new capital equipment. Be it electric vehicles or telemetry, time invested in training reaps rewards in not having to manage failure.

Chris Devine, operations manager at the Merseyside NHS Trust was very candid when he suggested that public sector fleet managers need to ”pick their battles and not challenge the status quo, all at once.” Chris went on to say that local authorities and public sector organisations don’t always have the bandwidth to build a business case or to seek government funding for implementation of electric vehicles and charging. Even if a bid can be written, the project management costs and time associated with obtaining funding and implementing change should not be underestimated. This was a point echoed across all of the public sector organisations and it is frustrating that, following the recent OLEV announcement of £400m of funding for charging infrastructure, organisations still feel unable to find the resources to bid for funding.
Charging solutions

Discussion naturally moved on to explore the types of charging solution that can be installed to support a fleet of vehicles.

Alun Davies from ElectrAssure explained the charging infrastructure available, ranging from slow to rapid chargers capable of charging a vehicle in less than thirty minutes.

It was also stressed that there are significant fire risks associated with using a three pin plug socket and from next year all publicly funded charges points must be ‘smart’ and be able to communicate basic charging data to a back office.

Alun reminded the delegates that the “survey phase is critical to ensure that the necessary power supply is available and ElectrAssure work closely with the power companies to make sure that the installation is problem free.”

The key thing to bear in mind is that whatever chargers are installed should be matched to the vehicle duty cycles to avoid over or under provision.

Alan from Phoenix Medical asked about the price of home chargers and after OLEV grant funding ,we established that each charger can be bought for a few hundred pounds.

The panel spoke at length about the support needed to make electric vehicles the norm. As already mentioned, the public sector are finding bid and project management resources scarce and this is inhibiting progress. It was agreed that support from Crown Commercial Services (CCS), as procurement partner, or a collaboration of commercial partners, could support the allocation of funds and implementation of electric vehicles.
Add into the equation that electric vehicle supply is typically taking between six and twelve months and life is proving difficult for the fleet manager.

There is still a real fear of buying the wrong product or solution, based more on the speed of change rather than backing the wrong horse. Obsolescence in technology is a genuine issue for cash strapped local authorities and whilst considering future proofing at the procurement phase helps, inevitable the pace of change worries fleet manager and can prevent investment.

How can the ‘risk’ be taken out of EV adoption? Paul from SG Fleet said: “Leasing is one way to future proof electric vehicle provision as the risk of obsolescence is passed from the local authority to the leasing company. You get to the end of the contract and hand it back”

As far as telemetry is concerned, Sarah from Trakm8 explained to the panel that “the hardware tends to change relatively slowly, but we can easily upgrade firmware. Regular remote software upgrades can help to prevent premature hardware obsolescence and future-proof longer-term investment in EV charging systems.”

The fleet manager faces some thorny questions not just by having to choose to lease or capital purchase, but also electric versus Internal Combustion Engine vehicles. Paul went on to say that leases are getting longer as vehicles are doing less miles and as EV technology is proving itself. “Customers have more confidence in the technology,” Paul said.

Gary Hickman from Liverpool City Council advised that: “the CCS portal can help in determining the impacts of long leases versus shorter leases.”

Tony Deus from Merseyside Police questioned whether customers know what vehicle they want or if they are less specific, but know what fuel they want. Paul from SG Fleet said it was common for customers to want an electric vehicle and for usage data to guide specific vehicle choice.

Mick Sweetmore of Merseyside Police currently makes capital outright purchases of vehicles but can see a time when having a mixture of bought and leased vehicles is more the model he will follow. This might help him identify opportunities to better utilise the existing vehicle fleet.

As the day drew to a close Bernie Sullivan from Merseyside Fire and Rescue summarised the day nicely: “Moving to electric vehicles involves a whole picture: behaviour change, the right infrastructure and vehicles.”Source: