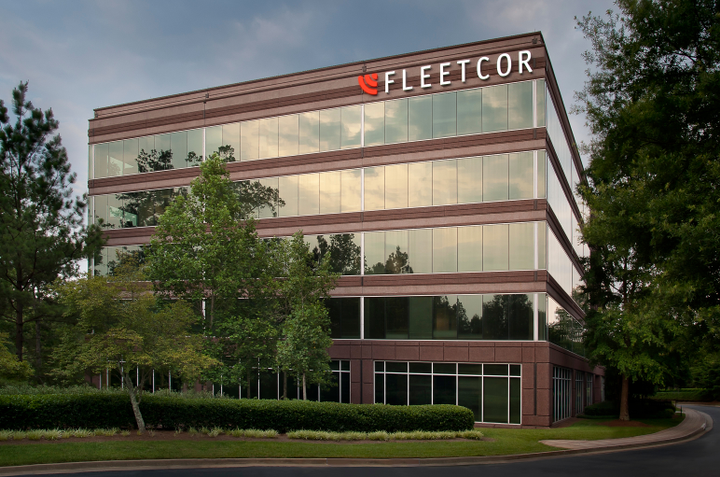 FleetCord Technologies, Inc. is based in the leafy Peachtree Corners suburb of Atlanta. Photo courtesy of FLEETCOR.

FLEETCOR’s Next Steps in Fleet Payments

Business payments provider FleetCor Technologies, Inc. has been moving “beyond fuel” with recent initiatives that will help the company expand its footprint with open-loop cards and digital payments, as it continues to combat rising fuel-card fraud.

Executives from the Atlanta-area company, which maintains headquarters nestled in leafy Peachtree Corners, sat down with Automotive Fleet for a closer look at the company’s trajectory.

FLEETCOR is often known as the corporate parent of over-the-road payment specialist Comdata, but the company’s scope is broader. FLEETCOR recorded $2.4 billion in revenue in 2018 with 2.9 billion transactions and more than 800,000 business customers.

How FLEETCOR Built Its Company

FLEETCOR as a corporate entity began in 2000, but the company has been in the fleet fueling business since the 1980s as the corporate parent of Fuelman, a regional fuel card issuing and processing business founded in New Orleans. There were about 30 licensees in the Fuelman network.

“We were just the backend processor, so there wasn’t a lot of value,” said Charles Freund, executive vice president of corporate strategy. “Centralizing the business became a fantastic business model.”

Including the Fuelman licensees, FLEETCOR has made over 70 acquisitions since the early 2000s, when the company began gaining a foothold in the North American fleet market with acquisitions of card lock fueling networks like CFN and Mannatec.

From 2006 to 2009, FLEETCOR expanded their fuel business to Europe with acquisitions of Keyfuels and the Fuelcard company in the UK, CCS in Czech Republic and PPR in Russia. They also acquired CLC Lodging in the US to brand out beyond fuel.

From 2010 to 2013, the company expanded globally with acquisitions like Efectivale in Mexico, CTF, VB and dbTrans in Brazil and CardLink and Fleet Card in New Zealand and Australia.

The company’s acquisition of Comdata in 2014 brought FLEETCOR more fully into the over-the-road fuel card market. Since that time, FLEETCOR has continued to diversify its portfolio with acquisitions of Sem Parar in tolls, Cambridge and Nvoicepay in AP automation and CLS in lodging.

Since business owners with fleets of 50 or fewer vehicles make up about two-thirds of FLEETCOR’s North America fuel clients, the company has been busy tailoring mostly open-loop payment solutions for their needs, which often involve purchasing non-fuel items such as tools, lumber, office supplies, or other items.

The stricter controls of a closed-loop fleet fuel card don’t service this segment as well, so FLEETCOR launched its Beyond Fuel initiative in 2015.

While open loop cards can be used almost anywhere – and feature a Mastercard or Visa logo – closed-loop cards require a pre-negotiated agreement between the fuel card company and the merchant. These closed loop cards often carry the brands of the fuel merchants.

FLEETCOR has also been working to tailor its fleet cards so its customers can pay for maintenance items, such as oil changes, replacement tires, or preventive maintenance at maintenance shops.

“We spent a bunch of time trialing different programs, doing a ton of customer research, and trying to figure out what clients want,” said Steve Greene, FLEETCOR’s president of North America local Mastercard. “Fuel is just one particular spend category of many that a business needs to run. What the drivers need fell into two basic categories.”

FLEETCOR identified two basic personas – a driver who needs to use the car so they won’t be stranded and an owner or manager who needs to charge travel and entertainment expenses that may involve higher dollar amounts.

This approach has resulted in FLEETCOR steering its clients toward open-loop corporate cards that give them more flexibility with their spend.

In March, FLEETCOR began offering an open-loop Mastercard through its Comdata business unit that replaced the company’s BuilderPro card. The new card provides more flexibility and offers a rebate structure that provides cash back on supplies and other non-fuel purchases.

In August, FLEETCOR enabled its Comdata MyFleet card so fleets that use it receive national account pricing on truck, trailer, and retread tires.

Companies can often pair open- and closed-loop cards. As an example, a smaller construction company could issue 10 closed-loop fuel cards to its drivers and provide an eleventh open-loop card to a manager who can authorize non-fuel spend.

Fuel card fraud has been increasing since 2016, mostly due to effective card security measures in other areas of the credit card industry, such as chip cards, which could see wider adoption in the U.S. following an October deadline that shifts fraud liability to merchants. The deadline has increased adoption of chip-enabled card readers at fueling stations.

Slippage is when the employee uses company resources to purchase food and drinks but reports the purchase as a fuel expense. This can also occur if an employee fills up their personal vehicle or a friend or family member’s vehicle.

Transaction fraud is when someone other than the employee uses the card to purchase fuel. Under this scenario, thieves often clone a stolen card to fill up multiple vehicles using the same stolen account information. Thieves are now more actively placing devices in the card slot of fuel pumps to capture data.

Application fraud is when a fraudster uses stolen information from a credit card and a social security number to apply for additional cards or credit.

Company fuel cards are more prone to transaction fraud because they often don’t use chips, which have significantly reduced theft in other parts of the credit card industry.

“We notice that when they move to a fuel card, the tools that we have provided help them see the exceptions,” Thekkekara said. “We can also see transactions getting declined because of the spending controls in place , for example if someone is trying to buy a TV from Best Buy.”

FLEETCOR has embraced digital payments by embracing contactless payments and working to shift commercial users in Brazil away from paper currency.

In March, FLEETCOR announced that it had recorded its first mobile fuel transaction through the Mastercard network, following its 2018 strategic partnership with P97 Networks, which provides secure cloud-based mobile commerce and digital marketing solutions for the convenience retail and fuels marketing industry under the brand name PetroZone.

After FLEETCOR’s acquisition of Sem Par, Brazil’s largest electronic toll payments firm in 2016 for $1.1 billion, the company began testing expanded use of its Radio-Frequency Identification sticker technology to pay for tolls, parking, fuel, and even McDonald’s fast food.

Earlier this month, Sem Parar struck a contactless-payment agreement with Nissan to install a sticker in every new Nissan vehicle built in the country. Nissan is now building 50,000 vehicles and plans to add up to 100,000 additional units depending on demand.

Its publicly traded shares moved higher in early August, after its second-quarter earnings report beat expectations. The company reported net income of $2.90 per share compared with $1.91 per share from the year-earlier period. Revenue increased 11% to $647.1 million.

Corporate payments, tolls, and lodging drove the growth and “the fuel category had another strong quarter, finishing up 9%,” said CEO Clarke said in a statement.