Sharing Fleet Services with a Nearby Agency 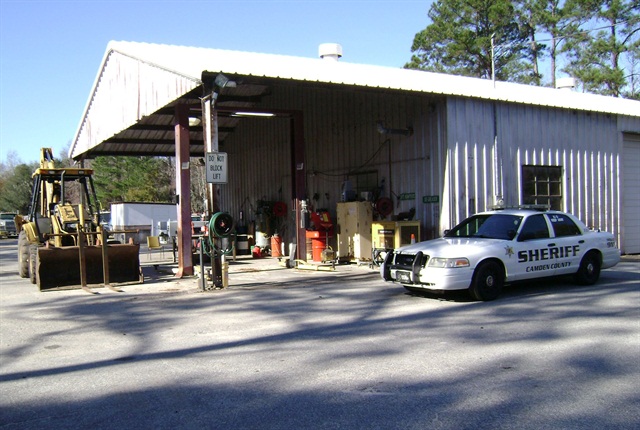 The Camden County fleet facility is used to maintain 123 vehicles and equipment, but this could change if the county administrator’s plan to consolidate with neighboring public fleets goes through. Photo courtesy of Camden County

Sharing Fleet Services with a Nearby Agency

Through its interlocal agreement, the City of Kingsland and Camden County in Georgia are able to:

That’s what Camden County in Georgia has recently chosen to do. Following the retirement of its fleet manager in November 2014, the county reached out to the City of Kingsland, Ga., forming a memorandum of understanding (MOU) that had the city’s fleet manager overseeing the county’s fleet management, including fleet administrative and technical staff.

Steve Howard, Camden County administrator, explained that the county was initially looking to outsource maintenance to the private sector. It had done a request for proposal (RFP) and hosted site visits. While this was happening, Howard approached the city to see if it was willing to share its fleet services director — that is, have the fleet director provide management services part time for the county.

Howard, who once oversaw a Florida Sheriff’s Office fleet and a Florida county fleet with outsourced maintenance, explained that the project isn’t an outsourcing. Rather, it’s an “interlocal agreement with the city to provide management assistance to the county. They’re still county employees providing services,” he said.

Sharing a fleet director is just the beginning, and Howard’s ultimate goal is to get the fleet departments of all three cities in Camden County to share services and employees, construct a new consolidated repair facility, and create an equipment pool — all in an effort to save money and implement best practices across multiple fleets.

How Does It Work?

Camden County’s fleet division (within the Administrative Services Department) oversees 123 pieces of equipment and works in one repair facility. The division consists of one administrative assistant and two technicians — with two additional technician spots currently unfilled.

Wise split his time between the two shops, assuming oversight of the county’s fleet employees. The county reimburses the city for the time Wise is ­working at the ­county, as well as transportation costs to get there — he makes the 14-mile drive in a city car. This means Wise has two bosses — Howard at the county as well as the city manager.

Inter-agency mergers won’t work for every public fleet, but many fleets can and do benefit from sharing services. These can include:

The Camden County Sheriff, as an elected official, has the authority to oversee his own fleet. After the city signed the MOU with the county, the sheriff was convinced to give oversight of his 86-­vehicle fleet to Wise. This gives Wise another facility to visit and two additional technicians to manage and further consolidates the local fleets.

Wise, after two months of working with the county fleet, has already made beneficial changes. He started with a fleet tour to see if Camden County technicians had the tools they needed for their jobs.

“Those guys have been very responsive. It is a new ball game,” he said, speaking about the county technicians.

In addition to the new partnership with the Sheriff’s Office fleet, the Fire Department, which had previously outsourced all its fleet maintenance, is now sending work to county fleet technicians.

“I looked at their repairs, and that [county] garage can handle probably 85-90% of the repairs that need to be done by the Fire Department,” Wise said.

By having county employees work on vehicles, the Fire Department is paying less per hour than outsourcing to a private vendor, Wise said. And the county technicians are already trained — one is certified in emergency vehicle repair while the other is certified in general repair of diesel and hydraulic systems.

Another change is in how the county purchases parts. The county often buys its parts from the state contract, and Wise’s opinion is that it can shop around a little more.

“I’ve been working with them on different vendors that they weren’t aware of or didn’t have access to. That’s going to bring a lot of their cost down in inventory and parts purchasing,” he said. As an example, changing a tire brand (to another equal brand on the state contract) can help reduce costs.

At the same time, Howard is working with finance directors to look into joint purchasing.

“I think the economies of scale for all parties would reduce costs,” Howard said.

And because the three previously separate fleets are under one manager, sharing equipment has become much easier. Howard’s goal is to create a joint pool of vehicles. A major interstate runs through the county seat of Woodbine to Kings­land, which could make sharing easier.

“By all local governments working together, it drives cost effectiveness, leveraging each entity’s assets through collaboration,” Howard said.

Meanwhile, Wise is working on sharing maintenance and repair equipment.

“We had to come up with a list between the entities, of equipment that we could possibly loan out to another entity to keep them from buying the same equipment,” Wise said. For example, the City of Kingsland­ is the only fleet in the entire county with an alignment rack, and it has the best-equipped service truck in the county, which has a welder and the tools to change semi-truck tires, he said.

Wise is also looking to see what the agencies can invest in together. The city used to have a paint booth, but it failed to meet insurance specs after the painter retired. Wise wants to look into building a common paint booth and hiring a painter to do body work and repainting for all government fleet vehicles in the county.

Another idea is to jointly purchase a transmission flushing machine, which he said no public fleet in the county has. While a machine can retail between $3,000 and $7,000, it would save a significant amount of time considering that technicians now do the job manually. Multiply about an hour per job with a flush every 30,000 miles for cars and trucks and 18,000 miles for patrol cars, and the time savings is significant.

Now that Kingsland and the Sheriff’s Office have joined the partnership, Howard is working to push the project forward by talking to the other two cities in the county — St. Mary’s and Woodbine — to gauge their interest in joining. Their decision will help determine a mutually acceptable location for the consolidated fleet repair facility and its size.

“We’re going to have to look at that, determine if that’s feasible or not, look at a cost analysis, and then make a recommendation to the board,” Howard said. “And that would bring opportunity to co-share staff.”

To fund this project, Howard is looking at SPLOST (special purpose local option sales tax) funds, which can be used to build public facilities. It’s negotiated every six years.

“We’re about four years out on the next one, and my goal is to begin the process now of laying a foundation, so that would become a tier 1 project, where we’d be able to identify a piece of property and then begin conceptually designing what that facility could look like — once you get the buy-in of all the cities and the counties,” he said.

Working as a Team

Howard is intent to run the fleet like a business, and that means seeking efficiencies wherever possible. Luckily for him, while others may hesitate at the idea of potentially doubling or tripling their workload as a fleet manager, Wise was never reluctant to take on the task. He has been managing the city fleet for 19 years and said employees at the city shop have it running like a machine.

“I’ve got a really great crew working here, and with the crew trained the way they are here at the city, I can take on the extra responsibility,” he explained. In fact, city fleet technicians are even asking to work on county vehicles, which Wise said he can’t give them until further agreements are reached.

“I’m a taxpayer too, and [I’ll do] anything I can do to help private citizens,” he said. “I’m pretty much born and raised in this county — I’m very loyal to my county and my city. So I’m willing to help any way I can and hopefully help them save money and give good service,” Wise said.

He added that in the ’90s, he also served as the educational commissioner for the county.