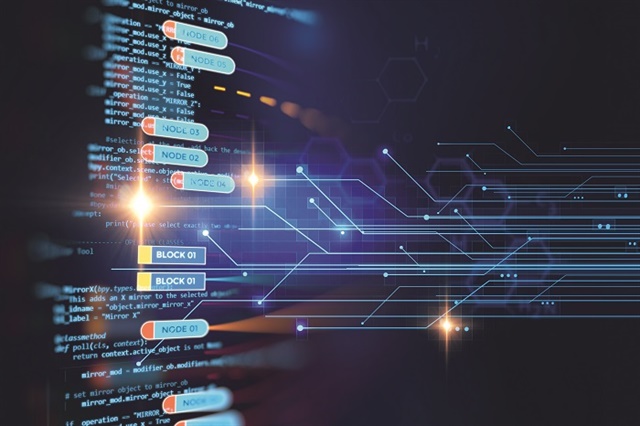 What is a blockchain, and how can the technology be applied to trucking?

Blockchain is a combination of technologies that allow transactions between parties via a trusted, shared ledger. Each transaction is coded into a block, which becomes part of a chain of blocks. Entries or changes to the chain cannot be made without authorization of all participating members.

The most well-known use of blockchain technology involves cryptocurrencies, such as Bitcoin, but it has the potential to transform logistics.

“While not really a communication tool, it is a revolution in communication,” says Ken Craig, vice president of special projects, McLeod Software. “The whole purpose is to really create a trusted environment. As such, it’s a mashup of several different technologies.”

Technologies have evolved to the point that such environments are possible, he adds. For instance, the internet has evolved and become a mainstream platform for all sorts of transactions. Distributed ledgers hit the scene in the 1990s – replicated, shared, and synchronized digital data geographically spread across multiple sites, countries, or institutions, with no central administrator or centralized data storage. Bitcoin is a type of distributed ledger. But along with that came the development of lower storage costs, increased computing speeds, and the maturity of peer-to-peer networking (another way for two or more PCs to connect and share resources without going through a separate server computer.)

“Bitcoin proved the technology, and those concepts can be applied to other industries,” Craig says. But where does it fit in with trucking? “It’s kind of like blind men describing an elephant,” Craig explains. “What it means to one may not be the same as it means to somebody else.”

The Blockchain in Trucking Alliance offers this definition: “To put it simply, a blockchain is like a database – it’s a way of storing records of value and transactions.” The key is that the database is “immutable.” An IBM white paper on the subject noted that in traditional transactions, each party keeps its own record (or ledger) of each transaction. That leads to each participant having its “own version of the truth,” instead of one version of the truth that all participants agree is correct.

For instance, Tirey noted that in industries such as equipment finance, blockchain will make three-party transactions between buyers, sellers and lenders “feel more like e-commerce does today,” essentially frictionless. Plus, it can add trust and transparency throughout the transaction.

A conference call hosted by Stifel Financial featuring Craig Fuller and Chris Burress of BiTA noted that “RFPs, proposals, contracts, and transactions are immutably etched in the stone that is the blockchain.” Furthermore, payments, settlements and other transactions can be handled without intermediaries, and the chain of custody of freight moved through the supply chain can be documented.

“All automation is ultimately about optimization,” Tirey says. Blockchain is just the next generation in frictionless commerce automation. He believes blockchain can help in three areas for trucking:

Tim Leonard, executive vice president and chief technology officer for TMW Systems, said in a recent webinar on blockchain that “We discovered two things we thought would apply about blockchain: contract management and vehicle maintenance.” He noted there are $140 billion in payments tied up in disputes in the trucking industry. Blockchain technology could help in resolving those disputes, since each participant in a transaction would have access to the same information on that transaction.

As for fleet maintenance, fleets would have the ability to know everything about a truck from the time it rolls off an assembly line throughout its service life: every oil change, PM, warranty repair, or other service would be visible in the blockchain to all participants.

“If you look at all the interactions within the supply chain, from shippers to brokers to carriers to regulatory agencies, you see there are hundreds of interactions between parties that would greatly benefit being distributed transactions,” says Mark Cubine, director of marketing for McLeod Software.

For instance, recordkeeping required by new food safety rules could be an area where blockchain makes an impact. Walmart is reportedly studying such food chain processes, which would allow the retail giant to know where its various products came from and their condition all along the supply chain.

“All of the things [the Food and Drug Administration] intended to be in the Food Safety Act are things we can accomplish with blockchain technology,” Cubine says.

One of the more promising avenues, according to several sources, are so-called smart contracts. As Leonard explains it, automated RFPs can be generated by a shipper. That RFP becomes a block in the chain. Bids by carriers become other blocks, as does awarding the contract to the winning bid. Data from the vehicle, including time, place and condition of the load, become blocks, making use of the truck’s sensors and telematics systems. The location of the load is reported to the chain at regular intervals, and when the load is delivered, proof of delivery can be generated automatically. And the shipper can immediately initiate payment via digital currency or other means.

Craig agrees that smart contracts offer much promise, although he says they aren’t really smart and they aren’t really contracts. Instead, they allow code to be placed in a block that is executed based on conditional things. For instance, a smart contract may include in its block instructions on temperature monitoring of the load. If it goes above or below a set point, that block will generate a message to the driver to stop and check the load. These events become part of the blockchain so all parties to the transaction — shipper, carrier, receiver, etc. — can see them.

How far away is widespread adoption?

Applications built on blockchain technology could be widely available within three to five years, it was estimated during the BiTA/Stifel conference call. Others think it may be a bit longer before widespread adoption.

“Realistically, the trucking industry is five to 10 years away from adopting blockchain,” Tirey says. The industry and lenders that finance trucks are “aggressively” developing the automation necessary to support online shopping, authentication, real-time credit scoring, and other transactions. Among the hurdles to adoption, he says, is establishing industry standards.

“The first step is developing use cases,” Craig says. “If all you have is a hammer, everything looks like a nail. Blockchain is kind of a hammer right now.” He adds that a lot of the processes used now in trucking are good and get the job done. “Not everyone needs a blockchain.”

He suggests asking ‘where does it make sense to use blockchain?’ He says areas such as fraud detection, vehicle maintenance, payments, and pricing are things now being looked at to determine “what would be a viable use case.”

Another consideration: Who are the players in a blockchain? Bitcoin and other crypto currencies use public blockchains – anyone can participate once they are validated. For trucking, on the other hand, the view is toward private or consortium-type blockchains, with a limited number of participants. Craig says in trucking, all players will be contractually obligated to follow the rules, how validation is carried out, etc.

Focusing on specific technologies at this point would be like “trying to unravel a ball of string from the inside,” Tirey says. Instead, he suggests starting with the transaction and how blockchain might optimize fleet management or freight logistics. “First, standards must be put in place and supported by participants.” Then blockchains can be linked “like Legos,” which would allow freight logistics in the U.S. to be tied into international logistics and banking blockchains.

Before technology companies start building blockchain apps, the question of standards must be addressed, and this is why the Blockchain in Trucking Alliance was formed. BiTA describes itself as “a forum for promotion, education, and encouragement to develop and adopt blockchain applications in the trucking, transportation, and logistics industries.” Members of the alliance, (which has been growing steadily, with UPS one of the most recent additions at press time) will jointly create and adopt industry-standard uses of blockchain applications, so the development of trucking applications are efficient.

“Right now, there are no standards,” Craig says. “That’s where BiTA comes in.”

Cubine says the industry doesn’t want to reach the same state with blockchains as now exists with EDI, or electronic data interchange. While there are standard EDI transactions, they can be different across shippers, which means trucking companies must customize standards for each customer. In this case, “the standards are not standardized,” he says.

“If everybody out there started building their own blockchains, we’d have chaos,” Craig says. Through BiTA, the goal is to “do a better job of helping everyone create standards that do not create problems for others involved.”

Many new technologies have a way of disrupting existing ways of doing business. Just look at the impact the growth of online shopping has had not only retailing, but also on logistics and trucking.

“Adopting new technologies is about businesses unplugging from the old technology and plugging into the new technology to improve productivity and lower costs,” Tirey says. And while blockchain is likely to make some technologies redundant over time, “we don’t know how or when blockchain will be implemented.” He does not expect blockchain to eliminate EDI right away, but future iterations of blockchain could “make EDI as we know it obsolete.”

Cubine says it could go either way. Some things that are communicated one-to-one will remain that way, he says. “Where the blockchain finds value are the one-to-many or many-to-one interactions, as it can consolidate a lot of information and provide one version of the truth for all parties involved.”

The Stifel conference call identified groups that might be potential losers in the widespread adoption of blockchain, including receivables factoring companies, traditional freight brokers, and other players that choose not to adopt industry standards, which could include shippers, motor carriers, and brokers.

At its core, blockchain technology is about establishing trust between parties. An IBM white paper considered blockchains to be like “instruments of trust” such as paper money, letters of credit, and the banking system.

“The blockchain is all about ‘trust but verify,’” Tirey explains. Traditionally, trust is built between parties via interactions over time. It can take a long time to build, but only seconds to lose it.

“Blockchain changes all that. The data can be trusted, because the network enforces the fidelity of the information.”