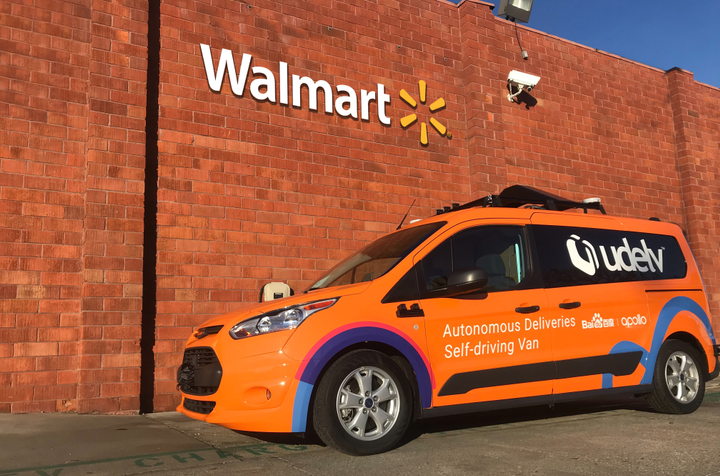 Udelv debuted the latest model of its self-driving delivery vans this past week at CES. The company said the second generation Newton van unveiled at the show featured new, state of-the-art technology. The company also announced a string of strategic partnerships and deals with the likes of Walmart, Baidu, Marubeni Corporation and more at CES.

According to the company, the Newton van’s autonomous driving technology is among the most advanced in the world, and was developed during months of close collaboration between Baidu, a leading Chinese technology company to develop the Apollo 3.5 open autonomous driving platform, which was also introduced at the show. The Newton van will be the first commercially available vehicle to feature the Apollo 3.5 autonomous vehicle system as well as a new shape-shifting cargo space technology.

This cargo system automatically adjusts the dimensions of storage areas in the rear of the van based on real-time payload requirements to better secure cargo and optimize the vehicle’s ability to carry as large a load as possible on each trip. Udelv said it will continue to use future versions of the Apollo platform modules to build its own autonomous driving algorithms for a range of delivery-specific situations in unstructured environments.

Udelv also announced at CES that it has signed multiple strategic alliance deals with global retailers and technology developers. The agreements include deployment trials with Walmart and XL Parts, as well as signing Japan’s Marubeni Corporation as a strategic investor to accelerate Udelv’s scaling process (link for full press releases). The partnerships are part of Udelv’s strategy to use the most advanced technology to shorten its development cycle, accelerate innovation and facilitate its ability to scale. They will cater to Udelv’s aggressive production-level expansion in several states outside California.

Udelv CEO Daniel Laury said: “Udelv’s mission is to reinvent traditional delivery models by developing the world’s best self-driving delivery technology. With our new shape-shifting cargo space technology, we are going to bring the most innovative technology to market.

“To date, with its automated cargo van, Udelv has proven its capacity to successfully address the delivery market in the United States in both the last and middle-mile segments. We’re the world’s most advanced autonomous delivery company on public roads and America’s top retailers trust us to deliver convenience and savings to their customers. This confidence is a massive driver of business from investors and partners internationally, and is being demonstrated with our most recent collaborations,” Laury added.

Previous Post
Fleet Operations, Finance Departments Not Seeing Eye to Eye
Next Post
The Economics of Sedans vs. SUVs