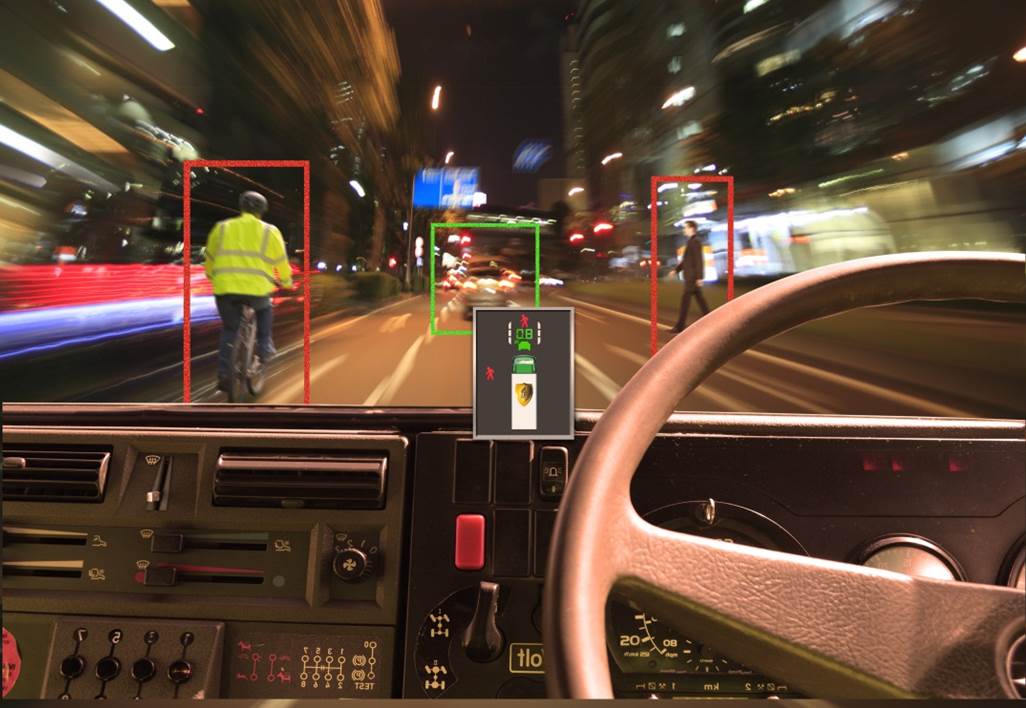 Today, governments and municipalities are actively promoting cycling as a solution to many problems faced by the modern highly urbanised society. Cycling not only contributes to reducing pollution from motor vehicles and congestion in city centres, it also improves health by exercise.

However, cycling is often considered dangerous, especially in urban areas, and not without reason. Indeed, cyclists alongside with pedestrians, are the most vulnerable road users, whilst also being the most difficult to observe both in day and in night conditions.

In London, the most often cause of fatal cyclists accidents representing 25% occur when a large vehicle is turning left into a side road (Transport for London, 2014).

This health and safety issue needs to be addressed quickly as more and more citizens are encouraged to use bicycle as a daily mode of transport, including children.

How big is the problem?

Deaths among cyclists represent a swaggering share of all road fatalities. In the Netherlands 32% of people that died on the roads in 2012 are cyclists (Global Status Report on Road Safety, 2013).

The most dangerous accidents for cyclists are those with buses, LGVs and HGVs. These accidents represent about 30% of cyclists’ fatalities both in the UK and the Netherlands (OECD, 1998). 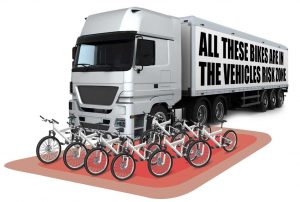 In comparison to crashes between cyclists and passenger cars, accidents with buses lead to fatalities or serious injuries 7 times more often and those with trams 12 times more often, taking into account vehicle kilometres driven by the respective crash opponent mode of transport (SWOV, 2011). Severe accidents (previously having led to at least one serious injury) with lorries are lethal in 36% of cases and the additional 41% of cases lead to a severe injury (SWOV, 2015).

Accidents occurring due to the blind spot of a lorry turning right account to almost a third of all serious cyclist-lorry accidents in the Netherlands, whereas in general in the EU there have been registered 236 lateral accidents compared to 25 frontal collisions (European Cyclists’ Federation, 2012). 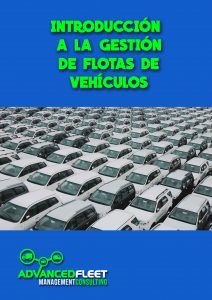 The European Commission is recognising the danger of blind spots for vulnerable road users and has imposed Directives 2003/97/EC and 2007/38/EC stipulating the compulsory need for rear-view mirrors for all lorry fleets driving in the EU, as well as approving devices for indirect vision (based on cameras) and vehicles equipped with these devices.

It has been proven that mirrors alone are not able to provide a full view for the front and lateral sides of the vehicle (Florida Department of Transportation Research Center, 2010).

The modern technologies can provide driver’s assistance in addition to rear-view mirrors in order to completely eliminate all the blind spots around the vehicle. 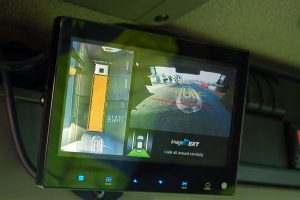 While cameras alone provide a complete view around the vehicle, accidents can only be avoided provided that the driver is looking at the monitor. In order to exclude accidents due to human error and fatigue, the collision avoidance systems may be equipped with visual, audio and haptic warnings. Haptic warnings may be delivered by vibrating steering wheel or seat. According to the European Commission’s research, audio and haptic warnings are preferable for imminent collision avoidance, since they attract driver’s attention irrespective of where he is looking.

At the same time, if the system is detecting all objects within the range of the vehicle, giving too many unnecessary alerts, drivers are constantly distracted and stop paying attention to the warnings.

The response to the problem is to give warnings only for imminent collisions, giving sufficient time to take evasive actions, according to the type of the object and the respective speeds of the possible collision opponent and the vehicle.

In late 2013, when in a short period of two weeks six cyclists were killed on London’s roads, five of them involved in accident with a truck, bus or coach, Ealing Council and Transport for London decided to take a proactive lead in developing a new system to deal with this safety issue (Ealing Council, 2014). 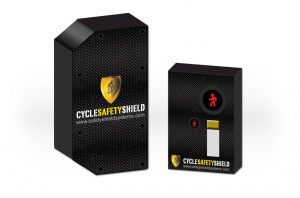 Ealing Council started working with Safety Shield Systems to adapt the technology that had previously been used by the Ministry of Defence for missile detection to fit any vehicle and feature a number of functions, including the driver warning of potential collisions only with cyclists, pedestrians or motorcyclists (PCM), filtering out other inanimate objects, such as bus stops and lamp posts, to eliminate repetitive and unnecessary alarms. The Council also wished to enhance the system by including features to help improve driver training and awareness, as well as reduce running costs through integration with existing fleet management systems that track driver behaviour and energy consumption. This included 360° Bird’s Eye View around the vehicle, Headway Monitoring and Forward Collision Monitoring to avoid accidents with other motor vehicles, High Beam Control to automatically lower the lights blinding for incoming traffic, Lane Departure Warning and Speed Monitoring (Ealing Council, 2014).

The trials of the newly developed system showed the following the results:

In order to respond to the demand of city administrations and traffic planning departments for complete and reliable information, upon which they could make decisions on traffic planning and infrastructure, by the end of the last year Safety Shield Systems has developed Data Collection Telematics System, which records in real time:

The information on collision warnings is presented by the software on a map view in real time, showing areas of concern with regards to potential collisions with cyclists, pedestrians or motorcycles. Each warning can then be seen on a street view, in order to be able to immediately get an overview of the potential accident hotspot and analyse possible reasons for numerous alerts.

The goal of Safety Shield Systems is to create a statistical data set retrieved from different urban environments, which would be as complete as possible, in order to make reliable analysis on most common reasons of dangerous road situations involving vulnerable road users and, subsequently, on the most appropriate solutions. 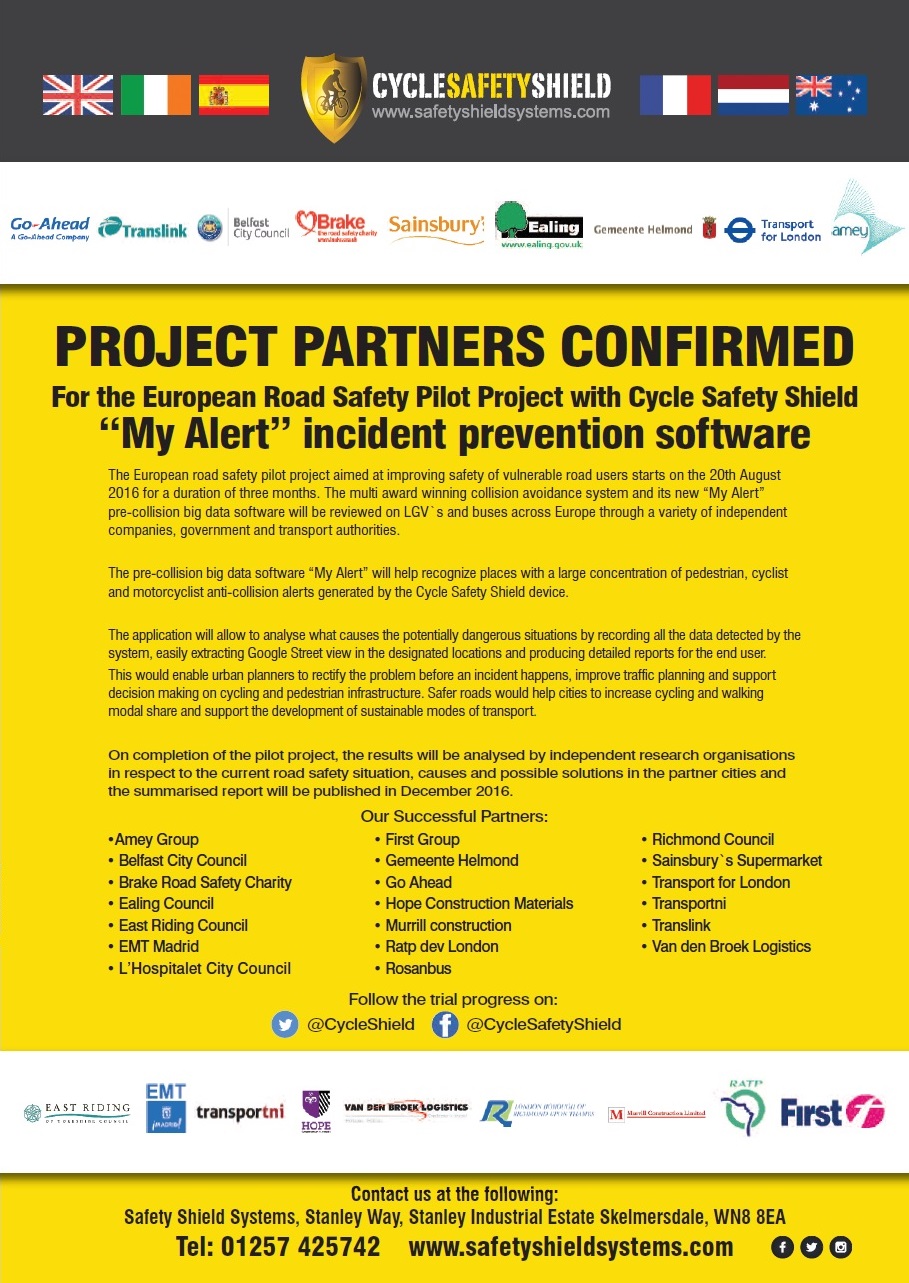 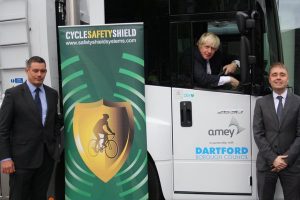 Among the authorities and private companies that have confirmed their participation in the trial are such organisations as Transport for London, Ealing Community Transport, City of Belfast, ​EMT Madrid, L’Hospitalet City Council, City of Helmond, Van den Broek Logistics, Amey Group, Sainsbury’s Supermarket, Murrills Construction, etc​.

Municipal and transport authorities, private companies with a fleet of vehicles and research organisations are invited to take part. 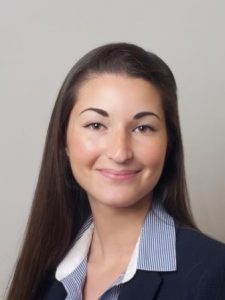 She was also closely engaged into urban logistics, transport and mobility during her work in the EU-Project Unit of the City of Graz.

Previous Post
How does Coca Cola’s supply chain management adapt around the world?
Next Post
How logistics contributes to Alibaba’s outstanding success